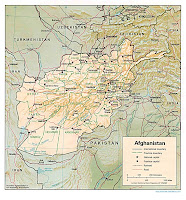 In a war where nobody is doing "body counts", that seems to be the only metric anybody can hold out as military success. The war in Afghanistan is now at a stage where offensives and battles are now recycled news stories with different dates.

U.S.-led coalition and Afghan troops killed about 80 Taliban fighters in a six-hour battle following an ambush in southern Afghanistan, the U.S. military said on Sunday.

Taliban fighters opened fire on Saturday with machineguns and rocket-propelled grenades on the joint coalition and Afghan army patrol from a trench system near Musa Qala in Helmand province, the most important town held by insurgents.

Such lengthy pitched battles are relatively rare in Afghanistan, where the Taliban prefer to "shoot and scoot" before air strikes can be called in.

But analysts say the insurgents are expected to fight hard to defend Musa Qala, in the north of Helmand, where they are heavily dug in after taking control of the town in February.

Over the past two months British soldiers have come under sustained attack defending a remote mud-walled government outpost in the town of Musa Qala in southern Afghanistan. Eight have been killed there.

It has now been agreed the troops will quietly pull out of Musa Qala in return for the Taliban doing the same. The compound is one of four district government offices in the Helmand province that are being guarded by British troops.

Although soldiers on the ground may welcome the agreement, it is likely to raise new questions about troop deployment. Last month Sir Richard Dannatt, the new head of the British Army, warned that soldiers in Afghanistan were fighting at the limit of their capacity and could only “just” cope with the demands.

When British troops were first sent to Afghanistan it was hoped they would help kick-start the country’s reconstruction. But under pressure from President Hamid Karzai they were forced to defend Afghan government “district centres” at Musa Qala, Sangin, Nowzad and Kajaki.

The deal — and the avoidance of the word ceasefire — allows both sides to disengage without losing face, an important aspect in the Afghan psyche. Polls suggest that 70% of the population are waiting to see whether Nato or the Taliban emerge as the dominant force before they decide which to back.

It looks like that question was answered fairly clearly. Meanwhile, in Afghanistan's Chora Valley:

The Sunday Age can reveal that Australian officers were involved in initial planning for the battle, but pulled out when they realised the June operation — in the same district where SAS Sergeant Matthew Locke was killed last week — would contravene our rules of engagement, which determine when lethal force can be used.

Most of the 60 to 70 civilians killed when Dutch forces repelled a 500-strong Taliban assault in the Chora Valley, 30 kilometres from the Australian and Dutch base at Tarin Kowt in Oruzgan province, died as a result of bombing and artillery fire, human rights investigators have found.

Australian SAS troops, including Sergeant Locke, had fought a series of intense battles alongside Dutch forces in and around the valley before they were withdrawn from Afghanistan in September last year.

At the time, Australian officers said the SAS had cleared the valley of insurgents, while [Australian Defence Minister], Dr [Brendan] Nelson declared Oruzgan to be "relatively stable".

But the Dutch and the Afghan armies had insufficient troops to secure the area, allowing the Taliban to move back in — a recurring pattern elsewhere in Afghanistan. As security deteriorated, the SAS were sent back to the area in April this year.