Deja Vu. We've had this tax cut before. Updated

OK, I've been asked if I am going to comment on the economic update/mini-budget/cynical vote-buying event produced by Flaherty.

My immediate reaction to the question is to say, "No." However, there are a couple of points which I'll make quickly.

First, the income tax cuts announced by Flaherty are virtually the same ones we had before the Conservatives came to power. Rational Reasons has expressed, just about perfectly, all I could say on the matter.

Secondly, (and I am not going to take a lot of time or space to spell this out), cutting the GST another point to make it a 5 percent consumption tax is just about the dumbest and most unfair way to lower taxes I can think of.

The GST is a progressive proportional tax. Those spending the most money pay the most tax. It's cheap to collect and it's virtually self-policing. Anybody with a reasoning mind can see that a value-added sales tax makes eminently more sense than the alternative: regressive income taxes.

By announcing that the GST will be reduced on January 1st, 2008, Flaherty has probably done some not-so-insignificant economic damage to small business in this country as consumers wait until after Christmas to make big-ticket purchases. But then, no one ever accused Flaherty of being very bright.

Notwithstanding that, Flaherty could have seriously slashed income taxes, left the GST alone, increased the basic personal exemption much more significantly and instituted a guaranteed minimum income.

He could have made taxation fairer. Instead he pandered to the base instincts of those who don't and won't understand which taxes hurt them the most. 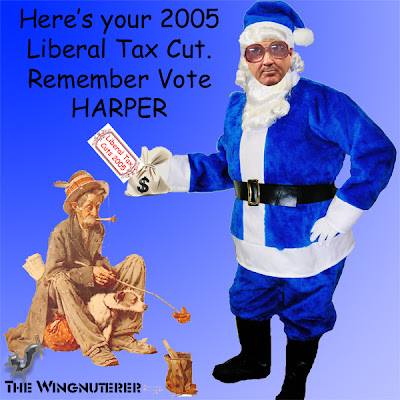