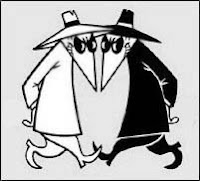 Some of you will be aware that Glenn Greenwald, after writing this post at Salon, received an email with an originator's address indicating that it came from the desk of Colonel Steven Boylan, the Public Affairs Officer and personal spokesman for General David Petraeus. (Yes, that General Petraeus).

None of this would be of any consequence if it weren't for the fact that the very thing Glenn was suggesting in his original post, the politicization of the US military, seemed to come through on the Boylan email. The email writer was sarcastic, insulting and well, just plain ignorant.

Then something odd happened. Boylan denied having sent the email at all.

There was something of an exchange between Greenwald and Boylan with Boylan suggesting he had no idea what was going on and Greenwald observing that originating email addresses and IP addresses of "legitimate" Boylan originated emails were identical to those on the "offending" email. That, however, might not have meant much until computer science PhD candidate Peter Booth, (University of Oregon, Computer Science Department), entered the picture with an in-depth analysis and one of those CSI-style lines:

I have to conclude that these two emails were written by the same person. Or, someone has hacked into the military infrastructure in an effort to discredit this one Colonel by sending cranky emails to bloggers. But one of the two, certainly.

Boylan may not be lying but that would mean there has been a breach of communications security in his office. Not good. Either way.

Greenwald is, quite properly, staying on this one. The truth really does need to come out.

In the meantime, Boylan has a problem. I'll give you a respite from the link farm above and send you to a completely clear and easy to absorb explanation by Jon Swift. In fact, you may wish to ignore all of the previous links and just read Jon's post. It explains a good deal, including this:

Meanwhile, there may be more fake emails sent from Boylan's email address and computer, which he'll also have to deny sending. My advice is not to believe anything "Boylan" says until this whole mess is straightened out.

Col. Boylan has just entered a forest of mirrors.
Posted by Dave at 15:42 Recommend this Post