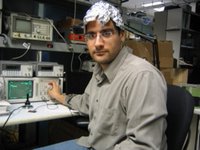 I ran across a compilation of some of the more bizarre human interest stories of 2005. Here are some of the highlights:

HOOD? WHAT HOOD? WE DON'T SEE NOTHING
Two Cedar Rapids, Iowa, men landed in jail after they continued driving on Interstate 380 when the hood of their car popped open and covered their windshield. Instead of stopping to fix the problem, the men stuck their heads out the windows so they could see and kept going. Two Linn County deputies took note and pulled them over.

SHOOT. HE WAS JUST TRYING TO BE FRIENDLY
In Muscatine, Iowa, Dean L. Wooten was fired for greeting Wal-Mart customers with a computer-generated photo in which he appeared to be naked _ except for a carefully placed Wal-Mart bag. Wooten reportedly told customers the store was cutting costs and the bag was the company's new uniform. A supervisor told him to stop showing the photo after customers complained. He was canned when he displayed the photo again.

MAMA MIA! ALL SHE WANTED WAS SOME PIZZA
An 86-year-old Charlotte, N.C., woman spent two nights in the city lockup after police said she called 911 dispatchers 20 times in a little more than 30 minutes to complain about service at a pizza parlor. Dorothy Densmore told dispatchers the shop refused to deliver a pie to her apartment. Densmore wanted the workers arrested. Instead, police arrested her.
Posted by Cheryl at 17:44 Recommend this Post