Support of the training mission 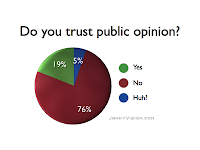 A poll asks a question about something no one knows anything about.


An (sic) narrow majority of Canadians support keeping upwards of 1,000 troops in Afghanistan until 2014 to train Afghan forces, says a new Ipsos-Reid poll that also shows the decision is most popular with westerners and men.
Fifty three per cent of respondents said they support the revamped and extended mission, although there is a caveat. Slightly more than six in 10 said there should be a debate and vote in Parliament even if the new mission involves only training, said the poll, which was released Friday.

That's nice. Maybe Ipsos-Reid can give us some answers we can't get anywhere else.

What's the mission? At this point no one has actually answered that question. There's nothing close to a defined mission and the more we all look at it, the more we're left scratching our heads. Far from appearing to be a decision to do something to benefit both Canada and Afghanistan, this whole idea looks like it exists solely to remain "involved". To date, however, no one has been able to describe what that future involvement looks like.

We've been fed a lot repeating information that Canadian troops would be located at the training establishments in and around Kabul. I pointed out earlier how that seemed highly unlikely. Now, from the Nato Training Mission - Afghanistan (NTM-A), we have even more evidence that this training mission is unlikely to involve anything like a cohesive unit under Canadian command. (PDF page 27).

BruceR has done the breakdown of the deficit in trainers by location and specialty. It becomes quickly apparent that 900 trainers offered by Canada would be hard pressed to gather in Kabul as a unit since the current shortfall calls for something other than the likes of an infantry battalion. Specialist trainers seem to be the greatest demand and the identified needs are scattered all over the country. If those are the training positions Canada is likely to fill then the first "training" roto is going to be comprised of a varied group of occupation specialists, split into small numbers, sown through different training establishments all over Afghanistan. Administering, managing and leading that type of mission will be a near nightmare.

So, Ipsos-Reid can ask all the questions it likes. People are answering from a position of zero knowledge. Something similar to their support (or lack thereof) of the combat mission which involved (involves) paltry amounts of information being provided by the government. Unless you know where to look and what to look for there is precious little on which to form an opinion.

And perhaps if average Canadians knew about some of the nasty bastards, (who are the sons of the nasty bastards which made a past excursion in the Khyber Pass less than pleasant), whose activities are doing more to expand the enmity of Afghans to the presence of NATO, they might be less inclined to agree with any further Afghanistan deployment at all. Subject of a future post.

There's that population who need know that "the troops" are out there doing something somewhere. They might know where, or why, but trust fully that whatever it they're doing, where ever it is they are doing it is inherently good. And that it would be 'not good' to bring them home.

To follow Boris,then, everybody has an opinion whether it's informed or not.

I got a question. Who trains the Taliban?

We should find out how they do it. They sure seem to be a hell of a lot better at it than we are.

I got a question. Who trains the Taliban?

The Pakistan ISI. They have done so from the beginning.

In fact, the survival of the Taliban relied heavily on assistance from Pakistan throughout its existence. Pakistan has its own reasons for that. It is an attempt to create a sphere of influence and eventually make Afghanistan a satellite, if not dependent state.

Oh I know about our ISI "allies".

My question was mostly snark. The Taliban infantryman "training" consists of knowing how to drive a Toyota and how to shoot an AK47 (at a NATO soldier or an Afghan villager, doesn't matter which one). That's precisely the training needed for the ANA to mop this whole thing up in 6 months max.

Couple of small problems however. The ANA will have to recruit at least a roughly equal number of young men seriously willing to put their lives on the line to support a foreign invader versus the Taliban. That will be never. Then the NATO intelligence services will have to lap the ISI in the region. That will happen just after #1 above.

Other than that nothing can go wrong.