Harper is buying a bomb truck for the Canadian air force... 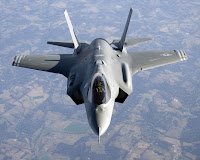 Not an air superiority fighter and not an interceptor. As MoS points out, the marrying of tactical nukes with the developing F-35 Lightning II, which the Harperites are all orgasmic about, is one of the roles initially intended for the F-35. As his post mentions, it's quite a package.

In terms of Canadian military doctrine, it's also very strange. This is the apex of Cold War thinking. The F-35, described as a multi-role fighter, is viewed by the US military as having a role outside homeland defence. Despite the yammering of the likes of "military genius" Dimitri Soudas and his cheerleading "military analysts" who suggest that it is a premier patrol and intercept platform, the F-35 is an attempt to jam too many roles into one airframe. And despite the sales pitch that this aircraft will be capable of all things to all users, the US military doesn't view it that way at all.

The United States military has been and remains very clear that the role of the F-35 is that of an air-to-ground delivery platform. The F-22A Raptor is the US Air Force air superiority fighter and is intentionally assigned to homeland defence. The F-35, on the other hand, is destined for a reach out and touch someone role. In short, it is being designed and built to perform an expeditionary role, exporting a thoroughly devastating weapons package across hostile borders or into hostile regions of a battlespace.

I could suggest that you just take my word for it, but why not get it straight from the horse's mouth. A presentation to the US House Armed Services Committee by the US Air Force.


The F-22A and F-35 each possess unique, complementary, and essential capabilities that together provide the synergistic effects required to maintain that margin of superiority across the spectrum of conflict.


The F-35 was designed from the bottom-up to be our premier surface-to-air missile killer and is uniquely equipped for this mission with cutting edge processing power, synthetic aperture radar integration techniques, and advanced target recognition.

Surface-to-air missile killer. So, all of you out there telling me how this is just a cat's ass northern patrol platform and that's why we're buying them can get busy explaining why the US Air Force doesn't see it that way.
One only has to look at the other users to understand what the F-35 is all about. The US Navy needs it as a strike aircraft. That's what the US Navy does - it projects force. The Royal Navy (although I seriously doubt an F-35 will ever find itself on the deck of any HM ship) - ditto. The US Marine Corps is an expeditionary force. The F-35 will serve their purposes as a battlespace neutralizer. Air dominance will come from somewhere else.

I'm not saying we don't need a force projection aircraft. Neither am I saying we do. What I'm saying is that the oft repeated garbage that this aircraft is exactly what we need to defend Canadian sovereignty and North American airspace doesn't stand up to it's stated uses by the primary users.

In short, it's time the "military geniuses" like Soudas and his sycophant "military analysts" were called on their endless stream of bullshit.

The real reason the Harperites have decided on this plane is right here. Defence requirements have nothing to do with it.