Just put a red X on that date and stare at it for a minute. Read this and know that it was predictable. Here's why.

They were dressed in Afghan army uniforms.

By the following morning the operation was complete and elements of the special force had taken control of Tajbeg Palace, just outside Kabul, and killed President Hafizullah Amin along with all of his 200 man bodyguard. Simultaneously, the force took control of the Ministry of Interior building, the Internal Security building and the Darul Aman Palace which served as the General Staff Headquarters. The Soviet force suffered 19 killed and over 50 wounded. The Afghan defenders lost over 200 killed and over 200 wounded with some 1700 troops captured.

The Soviet special forces had arrived two days earlier among a draft of airborne troops which arrived in Kabul on 25 December, 1979. The Soviet 103rd Guards Airborne Division landed at Bagram air base on the morning of 27 December. 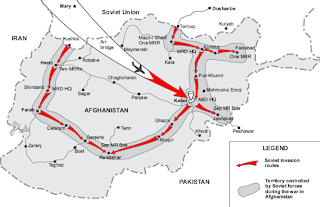 As the Soviet special forces were taking key government centres in Kabul, the Soviet 40th Army had already entered Afghanistan from the north crossing the Amu Darya river at Termez, Uzbeck SSR and the then Turkmen SSR town of Kushka. At the same time an air bridge was established into Bagram air base. By the end of December the Soviets had 80,000 troops on the ground in Afghanistan. Two weeks later that number was closer to 100,000.

That Soviet invasion was in response to months of insurgency and open revolt by large segments of the Afghan population. Ostensibly carried out at the request of Afghan government (they were invited in), the actual plan was a takeover of Afghanistan utilizing the well-tested Soviet method of armed stabilization. The Soviets also had a great deal of mistrust in Hafizulla Amin who had come to power in a violent coup during which his predecessor, Nur Muhammad Taraki, had been purposely killed. The history of Afghanistan politics prior to that event is a tangle of uprisings, civil war and factionalized infighting.

Once the Soviets had occupied Afghanistan they took control of all major urban centres and had installed Babrak Karmal as president. The mass occupation was intended to quell the uprisings and restore calm to the entire country. It did the opposite.

The presence of Soviet troops, not yet engaged in open warfare, had the effect of causing even greater rebellion which the Afghan army and security forces were unable to contain. In fact, the desertion rate of the 80,000 strong Afghan army had reached critical levels which saw huge numbers joining independent rebel factions - a loosely allied and largely disorganized body which would come to be known as the mujahideen.

The Soviets were dragged into open warfare with the mujahideen and, in a future post, I will detail some of what happened, how they became so strong and the massive mistake that took place after the Soviets realized they had been defeated. What the Soviets left in Afghanistan was a political vacuum and a well armed insurgent force. What followed their departure was a mass fratricide. While the Soviets have to take some of the blame, most of the fault lies with the countries that treated the Soviet withdrawal as the end game. Failure by the nations which had armed the mujahideen to acknowledge the obvious danger they had created would erupt into a bloodbath.

On the 15 February, 1989, Lt. General Boris Gromov, commander of the Soviet 40th Army walked across the bridge at Termez, Uzbeck SSR and became the last Soviet soldier to leave Afghanistan, completing a withdrawal which had been agreed upon two years earlier. The Soviet engagement in Afghanistan lasted 9 years, 1 month and 20 days.

No one followed them across the Termez bridge.

From the time of the first air attacks and the NATO commitment to support the U.S. assault on and occupation of Afghanistan on 7 October, 2001 to Saturday, 27 November, 2010, NATO forces, including Canada, have been at war for 9 years, 1 month and 21 days.

And there is no end in sight.

Some pertinent reading.
Posted by Dave at 20:18 Recommend this Post

Email ThisBlogThis!Share to TwitterShare to FacebookShare to Pinterest
Labels: Afghanistan, history repeats itself

It's appalling.
And there was a story recently that 90 per cent (I think) of the Afghan people don't know anything about 911. So a bunch of more powerful nations have invaded them again and they don't know why.
The worst mistake, I believe, was never to define what "winning" meant -- I had hopes that at last Obama would define it, when he said last December that the goal was to make sure Al Quaida was defeated. But this moment of clarity seems to be lost in the shuffle, now, and we're back to vague aims and incoherent promises about building schools and training and all that.

I have question - what does 'defeated' mean when we are talking about an organization like al Qaeda which is so ephemeral in the first place?

It's not like it has a single, coherent head (or even head cell) that once disabled significantly inhibits their ability to function.