Speaking of things that fly .... 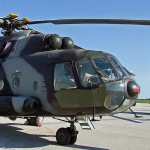 Can you say awkward?

Ooooh. I would think the auditor-general might have wanted to know about that. In the AG Fall 2010 report there is diddly about an MI-17 acquisition.

"It was competed, it was open, but for reasons of security I really can't go into any other details," Defence Minister Peter MacKay said Wednesday.

I wouldn't be too sure about that. Since the AG missed it in a detailed report entitled Acquisition of Military Helicopters, one has to question the veracity of MacKay's statement. Sounds like some details weren't available to the AG.

So off to the digs and what do we discover? Ah yes, there was an idea way back when it was realized that the CH-47 Chinooks we ordered were not going to appear before the previously scheduled end of the Afghanistan mission.

Shortly after the RFP’s release, Canadian defense think-tank CASR began pointing out 2 potential solutions to this dilemma. One is the possible solution discussed during November 2005 coverage of Canada’s “emergency” purchases for Operation Archer: buy Mi-17 helicopters, the same type flown by East European NATO allies and by the Afghan Air Force. A Russian trade delegation made that precise offer during their March 2006 visit to Canada, and a Canadian company named Kelowna Flightcraft is already cooperating with the Mil factory in Kazan, producing Mi-17KF “Kittiwakes” with fully Westernized avionics and rear loading ramps.

Right. And if you read the above you'll notice that the original had a bunch of links in it back to the Simon Fraser University based CASR think-tank site. Back to that, right after this.

Mi-17s wouldn’t be a substitute for the Chinook. Their load is 24 fully-equipped troops at best, with an external sling load of 3,000 kg, vs. the stated Canadian requirement of 30 troops and 5,443 kg. Hot and high altitude conditions will reduce those totals further. On the other hand, their cost is about 1/8 that of a new CH-47 Chinook, and deliveries would have been rapid. They would create a temporary solution, one which could be repurposed later to other military roles, given away to the Afghans, or even given civilian rescue or disaster-related roles as Chinooks become available.

So, the Chinook would still have to be purchased, but to fill an immediate need, these things might work. However, cost conscious Canadians would see the price differential and ask, "Why, Peter?"
Ah yes... those CASR links. Don't waste your time. Despite the fact that Defense Industry Daily was able to link back as recently as 28 Oct 2010, CASR now has this statement regarding all previous things MI-17.(highlighting mine)

This Background Index previously focused on the Canadian Forces medium-lift tactical helicopters required for Afghanistan. That medium-lift role has now been filled through the purchase of six ex-US Army CH-147D Chinooks. At the end of Canada's Afghan mission, remaining CH-146s  – one CF Chinook is said to have been lost to enemy action – are to be sold back to the US government. Those 'D models will be replaced by CH-147F MHLH (Medium-to Heavy-Lift Helicopters).

In earlier Background pages, we covered CF options and alternatives to hard-to get Chinooks. With CH-147s in place with Canada's JTF-Afghanistan Air Wing in Kandahar, those alternatives became moot and the pages have been removed.

Really?! Not so moot. And the timing is so ... coincidental.

In the CBC article we hear from University of Calgary political science professor Rob Huebert.


Defence analyst Rob Huebert said the huge price difference between the two helicopters might help explain why the government has kept the deal secret.
"From a political perspective, one can also see that the Conservatives may not want to be seen to be undermining their claim that they needed the Chinooks to the degree that they did," Huebert said.
But he said the air force was wise to choose an American helicopter to be a permanent part of the Canadian equipment in order to have access to experts or spare parts. That could be a concern if relations with Russia start to freeze up, he said.

Whoa, there! First part good. Second part bad.
Yes, there are a lot of questions as to why the Harperites kept this deal secret. The MacKay line of security is a load of crap. Huebert has it right that this has a lot of potential to embarrass the Conservatives. And they could be left wanting for any coherent answer.

No. Huebert is over-simplifying and playing at "cold war" mentalism with regard to suppliers. While the MI-17 (MI-172) "Kittiwake" is a Russian-built airframe, it incorporates avionics from BAE in the UK and (brace yourself) Kelowna Flightcraft in Canada. As they are only too happy to point out.

No, the problem for the Conservatives is that having leased Russian helicopters, and with Canadian companies involved, it makes the northern dance with the "Bears" look a lot less ominous and the theatrics of MacKay and Soudas even more pathetic.

Worse though, is that Harper and MacKay have yet to learn that it isn't their money. Any suggestion that this was "open" is misleading at best.

Another question: "It was competed," says MacKay.

Against what? Who were the other contenders? Where did it appear so all of us could be assured of a proper bidding process? Where?

Mind you, given the Harper/Soudas/MacKay definition of a competition it was probably a tossing of credit cards into the middle of the table to see who was going to pay for the drinks.
Posted by Dave at 11:05 Recommend this Post

Well, maybe a Sukhoi airframe with Canadian avionics and maybe engines might be an F-35 alternative.

This ties in with the point made in the last F-35 post regarding 'the best' versus 'what works.' The MI-17 is a very capable aircraft and a cheap and readily available substitute of for Chinooks.

Those helos are not high tech stealth machines requiring elaborate avionics suites; they're flying lorries. They require a certain performance envelope and the ability to bolt on defensive countermeasures is nice too. But their main task is very simple: reliably fly troops and kit around.

All Canada needs is a helicopter that can do that. Indeed their lower cost and lesser capacity are not disadvantages. They allow Canada to acquire more of them which gives us a much greater flexibility of use and deployment with what we might do with CH147s. Losing a MI17 also risks less lives than a Chinook if they were both loaded to capacity with troops.

And, might add, the Mi-8/17 is a proven star performer. Tough like bull. High altitude performance walks away from many equivalents.

On a tangential note, I sometimes wonder if too much Gucci kit will translate into a loss of innovation capacity within the armed forces.

E.g. Too much reliance on GPS and we lose the intuitive skills that come with navigating by map and compass. Too much digitization, reliance on high tech comms and other systems, firepower, and the incentive and thus ability to think and problem solve creatively erodes.

Hunger breeds clarity and creativity. I think the Pashtun get this.

I am no mathematician but the Russian M1-17 (with a de-icer) cost 17 million per copter...the Boeing Chinook (with de-icer added) cost 80 million per copter ...4 copters for the price of one..Look it's more than a little obvious Harper didn't plan on this becoming public knowledge and got caught with his pants around his ankles yet again

Curious. The story's been out since this AM but the Blogging Tories seem blissfully unaware that our godgiven government has been TRADING WITH THE ENEMY!!!!
One awaits the explosion of...See! we told you Stephen was an economist.

The Seer said...
This comment has been removed by the author.
07:13

Worse though, is that Harper and MacKay have yet to learn that it isn't their money.

Well, possession is nine-tenths of the law; so ninety percent of it is their money.