By then, we may be swept away by the waves 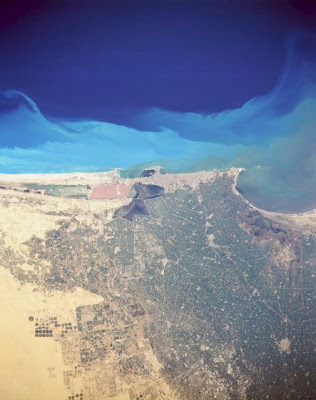 That's a statement made by a resident of Alexandria, Egypt. Here's more of what he said.

I worry that the government won't do anything until a crisis hits us. By then, we may be swept away by the waves.

The fears of Alexandria taxi driver Ahmed Fatta.
Bad news, Ahmed. Not only are most readers pronouncing your name incorrectly, but a whole host of governments have done exactly what you fear - nothing.

While Steve Harper and his wife (whatever she calls herself now) are hoping to do a little Beatles medley with the Emperor of Japan, the physical world is changing. Even if Steve and his hillbillies deny it.

The problem is, in a place like Alexandria, sea level rise is no longer just a possibility. It's happening ... RIGHT ... NOW.

More than 58 metres of coastline have vanished every year since 1989 in Rasheed, also known as Rosetta, said Omran Frihy of the Coastal Research Institute.


"There are hot spots, but that doesn't mean the whole Delta is at risk. Before we start talking about doom, we need to know where those spots are and act on protecting them," Frihy said.
Increased salinity seeping into underground waters will degrade farmland and cut production, experts say, in a country where food price rises have sparked unrest in the past.

Is Alexandria doomed? Well, unless they start having a conversation with the Dutch about polders, yeah, it probably is.
Posted by Dave at 11:41 Recommend this Post

the problem that alexandria is experiencing is NOT due to global warming in any way whatsoever.

i know that must come as a disappointment to some.

The city's problem, indeed Egypt's problem is the Aswan Dam which prevents all the silt that has fertilized the Nile River Valley from reaching the sea.

Without that annual refresh, the Nile delta is eroding.

Ummm... let's see. How do I put this in a way you'll understand?

I'm an oceanographer. A real one. You're not.

By shortening each Egyptian a little this rate of shrinkage could be easily accommodated.

I'm an engineer. We are trained to solve these kinds of problems.

You shifted from metric to imperial without missing a stroke and without any visible sign of a calculator.