Rebranding Israel : Babes in bikinis vs. the coronary stent 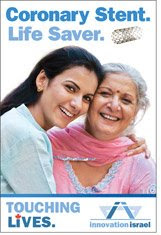 The Israeli consulate in Toronto is gearing up for "Brand Israel" , a $1M 10-month ad blitz campaign which will be displaying positive images of Israel in Toronto bus shelters, on billboards, on radio and TV starting in September. The ad here features the "Innovation Israel" coronary stent.
Consul general Amir Gissin promises the campaign will be "an attack on all the senses".
Given that it is sponsored by Sidney Greenberg of Astral Media, Canada's largest radio broadcaster; Joel Reitman of MIJO Corporation; and David Asper of Canwest Global, I'm sure it will be.
"The way to fix negative images of Israel is to present Israel in a positive light elsewhere," Gissin said. "Never has there been this [scale] of combination of business and philanthropy for Israel."
Well, that might be true if you don't count the last seven years of the Brand Israel campaign in the U.S.
ISRAEL21c boasts it "has placed more than 5,000 stories with positive images of Israel and Israelis in mainstream American media" and "tens of millions of eyes see ISRAEL21c reported stories, yet most of them don't know that ISRAEL21c is the source".
Their most famous stories include a former Miss Israel in a bikini on the covers of Maxim and the New York Post, and the Newsweek photospread "Babes in the Holy Land", financed in part by the Israeli Ministry of Foreign Affairs.
The president of ISRAEL21c, formerly national president of AIPAC, explains the strategy :

"All the recent research on Israel's image or brand in America indicates that the one demographic group that has the least positive knowledge of Israel in America is men under 30. To them, Israel is a place of armed military conflict and little else."

David Saranga, the Israeli consular official based in New York who initiated the Babes in the Holy Land photoshoot, agreed :

"We have to find the right hook. And what's relevant to men under 35?
Good-looking women."

So this is what they got :

Figures, doesn't it?
The Americans are targeted with Babes in the Holy Land; Canadians will be getting the coronary stent.

P.S. Dear Jerusalem Post : All the wonderful goodwill generated by your report on the Branding Israel campaign is unfortunately somewhat diluted by your having a "Bomb Iran? Vote now!" NewsMax poll on the comments page accompanying the article.
Cross-posted at Creekside
Posted by Alison at 03:40 Recommend this Post