So much for the Joint Support Ships. The Conservatives, as true to form as previous conservative governments, have just cancelled a major shipbuilding project for the Canadian Navy. And did Junior MacKay, our bold and brave minister of National Defence gather everyone together for a morning press conference and then answer questions? No.

The Conservative government has quietly scuttled the navy's $2.9-billion project to replace its aging supply ships, saying bids from the shipbuilding industry were “significantly” higher than the money set aside for the program.

It has also cancelled a tender call for the purchase of 12 mid-shore patrol ships for the Coast Guard.

The decisions were announced in a statement issued at 8:30 Friday night by Public Works Minister Christian Paradis.

The bids have always been higher and the bidders and the navy have been complaining for months that the funding was far too low. That has sprouted another rumour which I will get to in a moment.

You know when the government issues a statement at 8:30 PM on a Friday night that it's trying to avoid considerable flak. But this announcement doesn't just hit the navy. The cancellation of the mid-shore patrol ships means the Coast Guard is going to be required to conduct fisheries protection with old, difficult to maintain vessels.

“These vessels are a key priority of the Government of Canada,” Mr. Paradis said in the release.

“However, the government must ensure that Canadian taxpayers receive the best value for their money.”

Key priority? Not that "key". The Joint Support Ship project had been approved in principle under a previous Liberal government. It hovered at the top of a priority list maintained by then-CDS, General Rick Hillier. It was the Conservatives who imposed a delay on the project immediately after taking office.

Pay very close attention to that last quoted line from Harper's Public Works minister. It says more than you think. We'll get to it.

But the decision to halt the Joint Support Ship project is a major blow to a navy that is already struggling to keep its existing 1960s vintage replenishment ships — HMCS Preserver and Protecteur — in the water.

The “tankers,” as they are known in the navy, are vital to keeping warships supplied with fuel, ammunition, spare parts and supplies during long overseas operations.

Both were expected to reach the end of their service life between 2010 and 2012, but Friday's decision means they will likely have to remain at sea longer.

It's a major blow alright and it is accompanied by the fact that the Frigate Life Extension program, essentially a mid-life refit for ships built in the 1990s, is also facing funding problems.

No one at the Defence Department was available to comment late Friday night.

Well, duh! You can bet that MacKay was hiding in the bunker and everyone else has rag stuffed in their mouth.

The program to acquire three new multi-role ships was announced in Halifax in June 2006 by former defence minister Gordon O'Connor. The announcement was heralded at the time as the beginning of a new era for the navy.

Almost right from the beginning the plan ran into trouble as designers tried to incorporate everything into the ships that naval planners had requested.

The ships were expected to function as re-supply vessels, cargo carriers for the army, a floating headquarters and possibly a hospital ship, depending upon the mission assigned.

Defence sources say the two consortiums that were bidding basically determined the ships could not be built for the amount of money the Conservative government had set aside.

The navy can take a little bit of blame for this in trying to develop a ship that had too many functions. On the other hand, it's not what they wanted to do. They would rather have had two different types of ships to fulfill the roles laid out for them by government. That would have led to other problems from manning to maintenance. In short, the navy was forced to try to squeeze as much as they could into a single hull. The JSS was actually the economy model of a larger plan.

Back in June the writing was on the wall for this project. It had been given such a run-around in Harpers much-touted "streamlined procurement" process that it really stood no chance of survival with the funding provided. Wait for it. There will be more. Cutting two major projects from the navy and the coast guard will probably mean the Destroyer Replacement project is also going to find itself swirling around the drain. The only shipbuilding project that might remain secure is the Arctic Patrol Ship, but then, that thing wasn't the navy's idea - it was Harper's.

Back to that line issued by Christian Paradis.

If this project gets re-started, and I wouldn't count on it, it is going to have a different form. The rumours I alluded to earlier are centred on one thing. If the government really wants these ships then they have to find a cheaper way to build them. Expect any new proposal to include having them built off-shore - not in Canada. 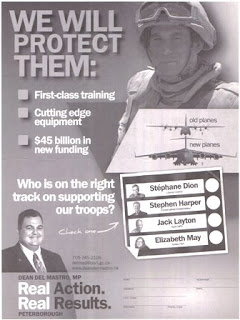 Then we can toss Harper's Canada First policy in the same garbage can as this thing belongs.

By the way, I stole that "10 percenter" image from Garth Turner's blog where you can read even further on the results of Conservative fiscal management.

More! At Impolitical and Canadian Cynic.