No, Really, Let's Have An Election 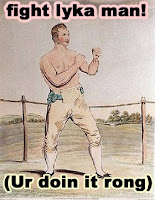 It’s August, it’s hot – what better thing to do in lovely Mississauga but have a great big barbecue?

Last Monday, roughly 400 people gathered, chowing down while listening to the nation’s leader alternately brag about his accomplishments, and taunt Stephane Dion to come out and fight like a man, or words to that effect.

Epoch Times was there, and tells us:

For quite some time now, Steven Harper has been taunting Dion to throw him in the briar patch. Last Monday this continued, with statesman and world leader Harper calling the leader of the loyal opposition a coward, eager to avoid an election contest.

I am a strong believer in the value of story – stories are powerful sources of context and understanding. When using narrativium in politics, however, one really ought to understand the original story.

Dancing around like an 18th century Marquis of Queensbury boxer might have some effect on a clueless adversary, but that sort of opponent wouldn’t be much of a threat, would he? A sober, thoughtful adversary is unlikely to be drawn by this bait.

Thankfully, narrative and reality may now be converging.

Br’er Rabbit wanted to be thrown in the briar patch because it was familiar and safe. I am guessing that Harper’s increasingly blunt taunting, and his willingness to break his own law on election dates, has become urgent because he is about to see one political advantage (albeit equivocal) flip to an undiluted disadvantage.

Though considerably smarter, he’s ideologically color-coordinated with a lame duck president whose worldview has had free rein for eight years, with outcomes so dismal that his party’s candidates hide behind the sofa when he comes to town. If Harper can force an election before Obama a new president takes office, even with another minority, he could coast for another few years, all the while carrying out a topiary restructuring of federal programs, funding and personnel. If not, he will lose some of the support due to being a fellow traveler of the US administration – how large a factor this is, I don’t know how to estimate.

Are Canadian voters getting a little tired of governmental posturing? Of obstruction? Of bragging about phantom accomplishments while quietly and unilaterally wielding the axe?

Well, perhaps not. But they might, and if they are, perhap the briar patch will cease to be the comfortable refuge Harper claims it is now. If November 5th comes and goes with no Canadian election, I am pretty sure the taunting will disappear from the playlist, and Harper will get on with his trimming and shaping until the real election he wrote on the calendar in 2007 -- October 19, 2009.