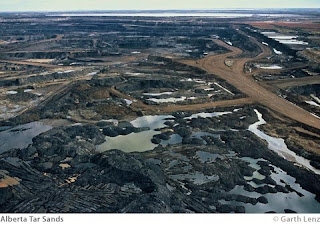 Bouphonia picks up the best stuff. Like this bit which finds Shell Oil having to answer for misleading advertising.

A Shell suggestion in advertising that oil sands were a sustainable energy source has been ruled out of order by the UK’s Advertising Standards Authority, upholding a complaint lodged by WWF-UK. [...]

The ASA came to the same conclusion about Shell's claims about the redevelopment of the Port Arthur oil refinery and said the advertisement should not be shown again in its current form.

In short, oil companies won't be allowed to "greenwash" their product in the UK. Too bad we let them do it here.