Georgia on my mind

Some interesting aspects to the Russian/Georgian brouhaha.

First, it appears that the McCain campaign has a connection. This is discussed with acidic clarity by the inimitable Pat Buchanan in an article titled "And None Dare Call It Treason" on the Creators Syndicate site.

Who is Randy Scheunemann?
He is the principal foreign policy adviser to John McCain and potential successor to Henry Kissinger and Zbigniew Brzezinski as national security adviser to the president of the United States.

But Randy Scheunemann has another identity, another role.
He is a dual loyalist, a foreign agent whose assignment is to get America committed to spilling the blood of her sons for client regimes who have made this moral mercenary a rich man.
From January 2007 to March 2008, the McCain campaign paid Scheunemann $70,000 — pocket change compared to the $290,000 his Orion Strategies banked in those same 15 months from the Georgian regime of Mikheil Saakashvili.
. . . . . .

U.S. backing for his campaign to retrieve his lost provinces is what Saakashvili paid Scheunemann to produce. But why should Americans fight Russians to force 70,000 South Ossetians back into the custody of a regime they detest? Why not let the South Ossetians decide their own future in free elections?

Then there's The War Nerd, aka Gary Brecher. A self-deprecating chap 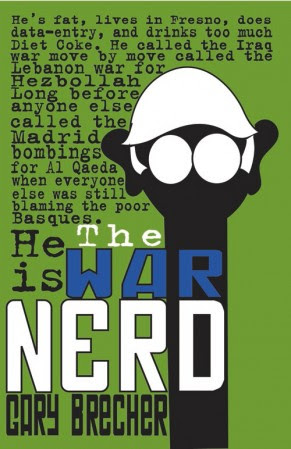 who has wit and perception. Gary can be found on a site called The Exiled. His article, titled "South Ossetia, The War of My Dreams" adds a sort-of-gonzo flavor.

There are three basic facts to keep in mind about the smokin’ little war in Ossetia:
1. The Georgians started it.
2. They lost.
3. What a beautiful little war!
For me, the most important is #3, the sheer beauty of the video clips that have already come out of this war. I’m in heaven right now.

But for me, right now, I say let’s stick to the action. This is the war of my dreams—both sides using air forces! How often do you see that these days?—so I’ll skip the history. Just remember that South Ossetia is a little apple-shaped blob dangling from Russian territory down into Georgia, and most of it has been under control of South Ossetian irregulars backed by Russian “peacekeepers” for the last few years.

The Georgians didn’t like that. You don’t give up territory in that part of the world, ever.

The Georgians have always been fierce people, good fighters, not the forgiving type. In fact, I can’t resist a little bit of history here: remember when the Mongols wiped out Baghdad in 1258, the biggest slaughter in any of their conquests? Nobody knows how many people were killed, but it was at least 200,000—a pretty big number in the days before antibiotics made life cheap. The smell was so bad the Mongols had to move their camp upwind. Well, the most enthusiastic choppers and burners in the whole massacre were the Georgian Christian troops in Hulagu Khan’s army. Wore out their hacking arms on those Baghdadi civilians.

So: hard people on every side in that part of the world. No quarter asked or given. No good guys. Especially not the Georgians. They have a rep as good people, one-on-one, but you don’t want to mess with them and you especially don’t want to try to take land from them.

The Georgians bided their time, then went on the offensive, Caucasian style, by pretending to make peace and all the time planning a sneak attack on South Ossetia. They just signed a treaty granting autonomy to South Ossetia this week, and then they attacked, Corleone style. Georgian MLRS units barraged Tskhinvali, the capital city of South Ossetia; Georgian troops swarmed over Ossetian roadblocks; and all in all, it was a great, whiz-bang start, but like Petraeus asked about Iraq way back in 2003, what’s the ending to this story? As in: how do you invade territory that the Russians have staked out for protection without thinking about how they’ll react?

Saakashvili just didn’t think it through. One reason he overplayed his hand is that he got lucky the last time he had to deal with a breakaway region: Ajara, a tiny little strip of Black Sea coast in southern Georgia.

This is a place smaller than some incorporated Central Valley towns, but it declared itself an “autonomous” republic, preserving its sacred basket-weaving traditions or whatever. You just have to accept that people in the Caucasus are insane that way; they’d die to keep from saying hello to the people over the next hill, and they’re never going to change.

The Ajarans aren’t even ethnically different from Georgians; they’re Georgian too. But they’re Muslims, which means they have to have their own Lego parliament and Tonka-Toy army and all the rest of that Victorian crap, and their leader, a wack job named Abashidze (Goddamn Georgian names!) volunteered them to fight to the death for their worthless independence. Except he was such a nut, and so corrupt, and the Ajarans were so similar to the Georgians, and their little “country” was so tiny and ridiculous, that for once sanity prevailed and the Ajarans refused to fight, let themselves get reabsorbed by that Colussus to the North, mighty Georgia.

Well, like I’ve said before, there’s nothing as dangerous as victory. Makes people crazy. Saakashvili started thinking he could gobble up any secessionist region—like, say, South Ossetia.

As well, Gary has another article on the lunacy, called "Georgia Gets Its War On…McCain Gets His Brain Plaque…"