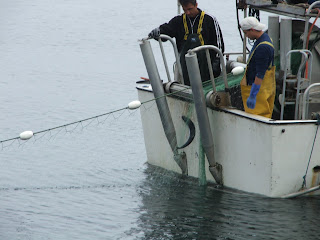 Take a good look at that picture. Take a very good look. Click on it and it will be nice and big and offer some perspective.

That's a Pacific coast gillnetter in Johnstone Straits pulling its nets. The target is sockeye salmon. These two young fellows had soaked their net for several hours before deciding to pull them.

Ten or twelve years ago that same picture would have been of two fishers and at least six sockeye in that portion of the net which would have been at least a third again larger than the one you see in the net. That wasn't the largest fish caught during that set, but it was certainly close to the average size.

Here's the tougher side of the story. That boat was the only gillnetter fishing Johnstone Strait. Normally there would be well in excess of 100 boats competing for the same fish. The only other boats fishing were purse seiners conducting test sets to provide the Department of Fisheries and Oceans with data. There were two of them. We checked them out too.

The gillnetter caught 34 fish. One seiner caught 42. They get to keep the fish and are allowed to market them. Don't count on them getting any further into the supply chain than Alert Bay, British Columbia.

If you like salmon, get used to this. And if you think that's all you're eating.... well.
Posted by Dave at 23:07 Recommend this Post

Email ThisBlogThis!Share to TwitterShare to FacebookShare to Pinterest
Labels: fish farms, salmon, where have all the fishboats gone