Something they would rather not discuss ... 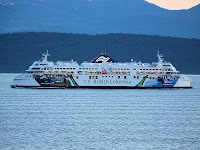 Unless you live in British Columbia you might not consider yourself affected by the goings on at BC Ferries. That would be until you realize that, while BC Ferries fares have skyrocketed since they became not-quite-a-Crown-corporation at the hands of Gordon "privatize-everything" Campbell, they also receive provincial and federal taxpayer subsidies.

On 22 December the relatively new Coastal Inspiration slammed into the berth at Duke Point, just outside Nanaimo. The result was about 12 people with minor injuries, a ship that is out of service until the vehicle deck weathertight doors are repaired and a shut down of the strategically important Duke Point terminal for months.

I have a pretty good idea what happened but, unlike the grossly uninformed commenters to the various media outlets carrying the story, and the failure of those media outlets to actually blow away the dust to see the real story, there is a story out there.

On The Waterfront started by looking below the surface. Tidal Station reaches in and pulls out some guts. What is interesting is that BC Ferries, once Campbell had crowbarred it away from government oversight, had refused to cooperate with any Freedom Of Information requests on the basis that they were a "private" company. In October 2010 they were compelled to behave as what they actually are - a government-owned operation - and started answering FOI requests. They didn't come along nicely either.

What Tidal Station produces is something that BC Ferries probably did not want you to know (since it was kept hidden away until forced into the light by an FOI request). The propulsion system on those awesome Super C ferries was a source of concern before they even finished building. In fact, the potential problem described in the 2007 report is likely exactly what happened.

Email ThisBlogThis!Share to TwitterShare to FacebookShare to Pinterest
Labels: bc ferries, coastal inspiration

Dave, You'd know the ins and outs of this better than I would, but I was talking dockworker last night who was explaining that BC Ferries could have left the Coastal Inspiration where it was at the ferry port and cost them nothing, but instead they've moved it to the drydock where moorage fees are so many thousand a day while they wait for parts.

Actually, I think they had to move it. They now need all berths at Departure Bay and they couldn't leave it at Duke Point and progress any repairs to the shattered berth.

BTW. While Duke Point was designed with two berths, they only ever completed one. Another money saving measure that is now costing them more than the savings achieved.