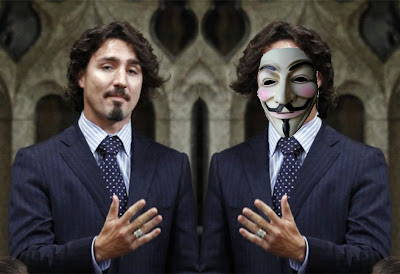 MAYBE, JUST MAYBE, we have the ANTI-STEVIE . . .
Posted by Edstock at 08:38 Recommend this Post

when I saw Trudeau's apology - the mix of grace, justified contempt, and that final, dismissive wave of the hand as though to say "this is what we have come to?" I thought that maybe the guy has grow up enough to take on the top role, or at least be the strong front person.

Trudeau always make the news. Always. Hate him or love him. So he will draw attention to issues that otherwise are considered to dull or complex for the press to bother with.

Man! He says "shit" and Kent gets bad press. Lots of it. The Liberals really need to look at this resource of theirs.

The Liberals really need to look at this resource of theirs.

The Liberals flopping around for the last 8 years with their eyes wide shut and only opening them to look at their navels is why they have been evicted from the official residences of Ottawa.

They truly do need to look at their resources, offer a leader that can inspire others and then learn not to bask in their own glow.

We are now paying the price for their bad decisions of the past.

right Dave. It's so frustrating watching them keep going back to the same old as if there's a magic formula there. I've been to a few meetings where they talk about renewal. The meetings go well, good, positive talk about change, then leave the inner circle to itself and public input is ignored.

The Libs rested on their Pearson/Trudeau era laurels for far too long and it was their undoing. Like any monolithic, moribund organization they became comfortable and intellectually lazy, allowing the discreditied and anti-progressive tenets of neo-liberalism to creep into the party and making it increasingly ineffective and unresponsive to the needs of Canadians. The dearth of dynamic leadership and and original thinking in the post-Trudeau years is evidence of this.

Chretien was an old party war horse who felt and acted like he deserved to be PM, regardless if it really was in the best interests of the country or not. Martin was a corporatist and millionaire first and a Canadian second. Dion, while certainly a decent enough chap and much closer to early Liberal ideals and policy, was simply out of his depth as a political leader, and Ignatieff never seemed to get beyond the point of treating Canadian politics as some sort of university don's lounge thought experiment. He did seem to show some fire towards the end of his tenure but it was too little too late.

Justin Trudeau, or more specifically, more progressive, young Liberals like him, are what the Party needs to reinvigorate itself and make itself more relevant to Canadians. I think the NDP is still trying to sort itself out after losing Jack and being left with an almost embarrassment of riches in neophyte MP's (and woe to them if they lose that hard won support in Quebec; they'll never gain governing status if they can't hold on to a win like that). I can't say if an NDP/Lib merger is in the cards or not, but Canada most definitely needs a truly progressive party (with input from the Greens, too) to break the hold Stephen Fucking-Harper and his fascists.