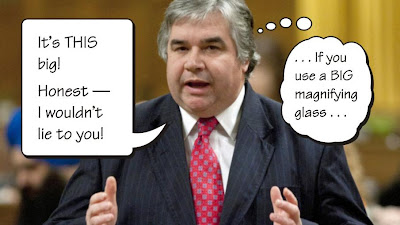 THE TIMES COLONIST has a couple of pages you must read. They sum up the egregious behavior of the Stevie government so far. The first, "Political honesty a fading value" asks common-sense questions:

Has lying become acceptable behaviour for politicians? It's a serious question. Society is, at its core, a network of relationships. Relationships rely on honest communication for survival. If dishonesty and amorality become the norm in politics, than democracy and society are threatened.

And recent behaviour by federal Conservatives raises questions about whether the governing party considers dishonesty normal and nothing to apologize for.
• • •
Finally, there is Conservative house leader Peter Van Loan, who defends a party operation that has flooded the riding of Liberal MP Irwin Cotler with calls telling people he is resigning and there will be a byelection and asking for their support. Cotler has not resigned. The calls are sleazy and dishonest. Yet Van Loan maintains his party's right to free speech includes spreading misinformation.

The second Times Colonist page, a cooment by Robert Radford, "Politicians are wasting money" is a nice summation of grief to date.

What is most disheartening is that the spokespeople for Canada's, I mean, Stephen Harper's government, don't seem to be concerned about the reputation or credibility of the government in the eyes of Canada's "99 per cent," whose hard-earned wages they are squandering.

Except, of course where Stevie decides to abolish or neuter by budget obliteration. Well, this may be a good thing because at this rate, just about every sentient voter will be fed-up in time for the next election. Disturbingly, the Stevie mind-set has a bloody-mindedness in his government's sleaze that is different from the Liberals' trough-raiding, but maybe it's just all those Stevie portraits.

I couldn't believe they use the free speech defense in their outright lies about Cotler. Now that is damn CONTEMPT of all that is considered decent.

Problem about them being booted out 4 years from now is that they will have destroyed so much that it would take a miracle worker to right the wrongs.

"they will have destroyed so much that it would take a miracle worker to right the wrongs." — Beijing, how I hope you are wrong. I hope, but like Dirty Harry asked, "Do you feel lucky?"

Isn't Harper a Neo-Nazi, who founded the Northern Foundation party? They said, the skinheads assisted Harper to organize his party. This was in 1989.

Read: Harper gave a speech in New York, at the Council of Foreign Relations, on Sept 25/2007.

We were warned what would happen to Canada if Harper won a majority. Sadly, our worst nightmares are all coming true.

I couldn't believe they use the free speech defense in their outright lies about Cotler. Now that is damn CONTEMPT of all that is considered decent.
thanks for sharing...