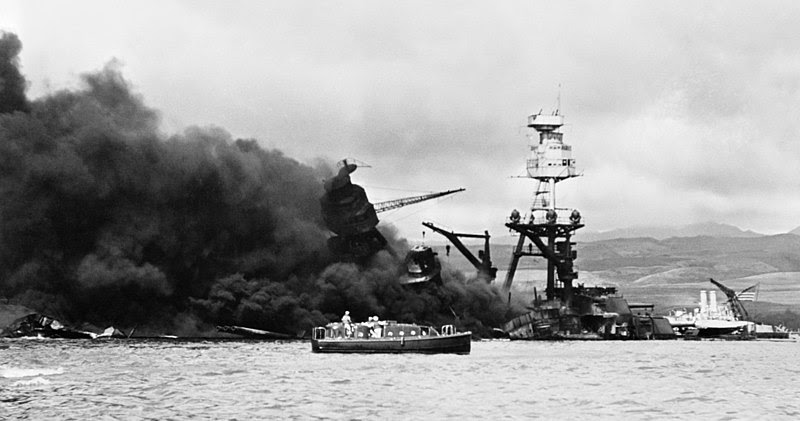 SEVENTY YEARS AGO, the Japanese attacked Pearl Harbor. Not a good day for Adm. Kimmel, and a few thousand sailors and soldiers. Then MacArthur drops the ball 12 hours later in the Philippines, to add to the debacle.

Then, four days later, on December 11, Hitler declares war on the US — and seals his fate, and that of the fascist racists who brought us Lidice and the Nanking massacre, and all the rest of the horror.
World sure has changed in 70 years. Vacuum tubes to quantum dots and nuclear fusion. The pace quickened.   Consider heavy bombers: the WW1 Gotha/Vimy 1916, then 25 years later, the Avro Lancaster, first flight 1941, then just 11 years later, the Avro Vulcan 600 mph jet, in 1952; or, the B-17, 1937, the B-29, 1943, the B-52 1951 or so; in these cases, the time interval is the same, but the jump in capability is a steep curve, almost asymptotic. And it's just kept going. 70 years: from Grumman F-4 Wildcat to Boeing X-37 Space Plane.

Society, in North America, changed forever, as people adjusted to new environments and were exposed to new cultures and ideas. Even before war's end, there were emerging desires for attention to civil rights and racism. Some, like the Zoot Suit Riots of 1943, got rather violent. But five years later, Harry S Truman's Executive Order 9981 ordered the integration of the armed forces, and the US would never be the same.

It's been top-of-mind these days, as I am 1/2 way through volume 2 of a trilogy called "Axis of Time". It's a science fiction series written by John Birmingham. An American/UN fleet in the south Pacific in 2021 winds up off Midway in 1942. Unlike the Mike Douglas flick from the late 80's, whatever it was called, these guys aren't going back, so 1941 America has to come to terms with 2021 America. It's a great yarn, so far.

Axis of Time should be on HBO.