INDIAN DEFENCES are chess openings characterised by the moves: 1. d4 Nf6 as you see: 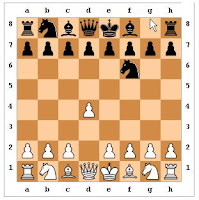 Well, Indian defence is top-of-mind for more than chess players. This has to do with the Seychelles, the red spot on the map below. 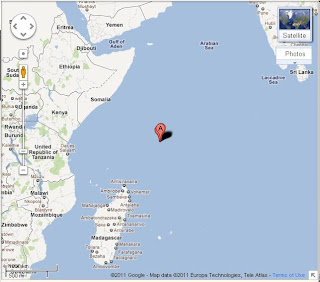 CHINA MILITARY POWER MASHUP: kind of mashed-up moniker, but a way interesting site for those interested in the Chinese part of realpolitik. The article, "Is China's Naval Base in Seychelles a Threat to India?" gets right to the question.

There's been much talk in the media of an apparent offer by the Seychelles of a base for Chinese ships deployed to the Gulf of Aden and the West Indian Ocean, to help combat piracy. While it's not yet clear if the offer has been accepted, Chinese media reports suggest that Beijing is actively considering it as a "resupply" base.
• • •
With this in mind, it's clear that the Chinese naval presence in this part of the Indian Ocean is not in India's interest. But what's China's interest in establishing a base in the Seychelles?

For a start, it satisfies China's hunger for a firm foothold in the Indian Ocean. The Seychelles provides the PLA Navy an ideal platform from which to counter any threat to its sea lines of communication from Africa by the U.S. Navy operating out of Diego Garcia in the Indian Ocean region. In addition, to assist with the resupply, rest and refit of PLAN ships undertaking anti-piracy duties in the region, China requires a large logistics depot, which can be supplied by air and merchant/naval ships. The Seychelles base could therefore eventually be developed into a permanent naval base.

Checking out other sections of the site, the confrontation with Taiwan is going to be very interesting, when it arrives. One report "Hu Jintao orders China navy to speed up its development" is rather ominous, for sabre-rattling:


China's navy should speed up its development and prepare for warfare, President Hu Jintao has said. He told military personnel they should "make extended preparations for warfare".
Posted by Edstock at 16:34 Recommend this Post