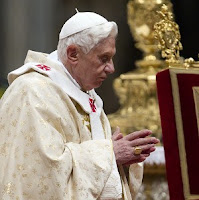 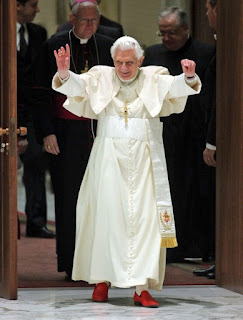 Of course, he was surrounded by the glittering gold in the pic above and in the article itself while making this astute observation.
No doubt wearing the nifty little red numbers to the left, also.
His hypocrisy knows no bounds . . . .
Posted by West End Bob at 12:31 Recommend this Post

OMG — that is one creepy, creepy picture. Reminds me of the evil Emperor in Star Wars; it's the eyes.

When the euro radical movement takes on the vatican and the papacy is when I will grant them credibility beyond that of snivelling middle class brats in search of an entourage.

They're all still terrified of daddy at the same time as they profess atheism.

God...I just love those little red shoes! (When you click them, you get super powers!)