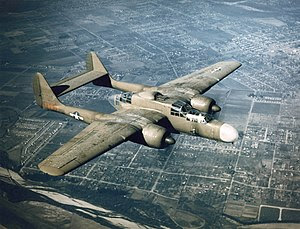 ONCE UPON A TIME, THE USAAF got a bright idea for a bespoke night fighter, which resulted in the Northrop P-61 Black Widow. Not one of John Northrop's successes. Over-weight, overly complex, the USAAF European theater generals wanted the de Havilland Mosquito, instead, but they got the P-61 because that's what the procurement process had produced. Mind you, it was not a Brewster Buffalo failure, the P-61 did OK, but it was an unnecessary redundancy and economic waste. For what it's worth, the USAF isn't the only beneficiary; the Navy and Army get their opportunities, too. A classic case is the expensive frustration of the M247 Sergeant York self-propelled antiaircraft vehicle.

Well, according to Dina Rasor at TRUTHOUT, the tradition is alive and well. Her article, "F-35 Fighter Is Latest in Long Line of Wasteful Weapon Failures", describes the stumbling to date.

There has been a flurry of articles in the defense press Tuesday about an internal Department of Defense (DoD) report on how the F-35 Joint Strike Fighter, the Pentagon's newest attempt to buy a fighter jet, is skating toward potential mechanical and monetary disaster. The DoD top civilian weapons buyer put together a team to do a quick look at how the fighter was doing in its journey to become the next main fighter in the DoD arsenal. The report has the usual DoD hedge wording and qualifiers, but the answer is: not too good.

Now, the newest fighter is falling under its own bloated procurement weight. Is the system, which has given us generation after generation of overpriced and technically dubious fighters, tanks, and other weapons finally succumbing to its own folly?

To understand why this keeps happening to our weapons acquisitions and to try to change it, you have to know some history on how the system works and what has happened in the past. It is a sad tale of déjà vu all over again.

Ernest Fitzgerald, the well-known Pentagon whistleblower who fought the bureaucracy in hand-to-hand combat for better weapons and realistically priced weapons from the 1960s to 2006, came up with a simple law of why this sordid history keeps repeating itself. Fitzgerald's first law of weapons procurement is: "First it is too early to tell, second, it is too late to do anything about it." I have found that this is the way that the DoD, the military services and the defense contractors squeeze every last dime out of the procurement budget and then even more, while making sure that their weapon doesn't get so obviously gross as to go on the rare weapons' chopping block.

It's like watching a slow-motion train-wreck, and thanks to Stevie and Airshow, we're paying for a ring-side seat. Think of it as a solid gold plank in the gallows that is being built for the Conservative Party.
Posted by Edstock at 11:13 Recommend this Post

Email ThisBlogThis!Share to TwitterShare to FacebookShare to Pinterest
Labels: F-35

The government has barely made it to step 2 so far.

Thank you very much for your very nice posting it is very informative post we are also same in this business and welcome you to visit our website.

Very great, Thanks for your very nice posting it is very nice and informative post we are also working in the same field we also provides the cleaning service and welcome you to visit our website.