Subway etiquette is important in Tokyo. No matter what happens, no matter how crazy the situation you must not react. A stoic countenance must be maintained. You must not complain or you will be the nail that sticks up. As a result, some people get away with murder on the trains. Molesting women is not as common as it once was, but it is still such a problem that some train lines in Tokyo have "Women Only" carriages during morning rush hour. And almost no one ever gives up their seat for the elderly or the heavily pregnant.

Poor subway etiquette and people's reluctance to complain has lead to the development of a series of monthly posters in Tokyo train station reminding people about how to behave on the train.

Every year, Japanese companies pay their salarymen a pair of bonuses - one at the start of summer and one at the end of the year. Traditionally, the end-of-year bonus is celebrated with massive drinking parties at which dour, serious-minded captains of industry drink like university frosh frat boys on Spring Break who have just gotten out of jail and are vacationing with the heir to a brewing empire after crossing the Sahara on foot. Leading to posters like this one.

This year's spring bonus was reckoned to be a very small one at most companies due to the worldwide financial crash and no one is optimistic about the year-end either. Which I guess explains the cans in the latest poster, what with convenience store or vending machine beers being the poor man's alternative to the local izakaya. 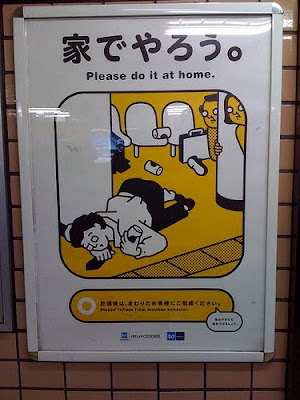 I know, you think I'm exaggerating. This was taken last night by one of my co-workers 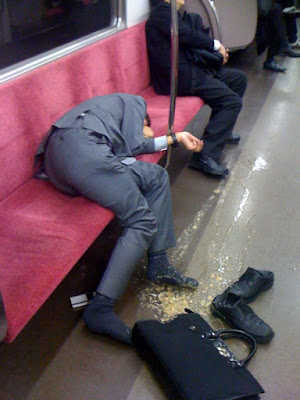 hat tip to the Bald Avenger
Posted by Unknown at 22:54 Recommend this Post

Email ThisBlogThis!Share to TwitterShare to FacebookShare to Pinterest
Labels: big in Japan, teh funnee