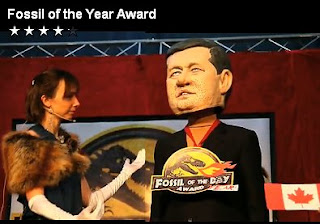 After the United States hammered out an agreement with 19 other major powers at an emergency meeting in Copenhagen to which Canada was not invited, Harper said Canada had been represented by the U.S. and "a group of close allies" :

The nature of the Canadian economy and the nature of our integrated energy markets is such that Canada and the United States need to be closely harmonized on this. If the Americans don’t act, it will severely limit our ability to act. But if Americans do act, it is absolutely essential that we act in concert with them."

This was Harper's first public statement at the conference. Previously Environment Minister Jim Prentice made a 3 minute speech in the middle of the night which did not mention targets.
Remember Harper's promise to put Canada back on the world stage?
After winning eight Fossil of the Day awards over two weeks at Copenhagen, Canada capped it off by getting the grand Colossal Fossil of the Year Award for being the worst-performing country at the talks and the "the country which has done the most day after day to prevent a climate treaty."
.
Canada repeatedly blocked progress on setting tough targets and committing to international financing for developing countries. While industrialized countries as a group must establish targets 25-40% below 1990 levels according to climate scientists, Canada's greenhouse gas emission reduction targets are the equivalent to 3% below 1990 levels by the year 2020 and even that is apparently negotiable.
.
So now I guess we'll just have to wait and see what the US wants Harper to do on the world stage next.
Posted by Alison at 18:23 Recommend this Post