ACCORDING TO THR, Esq., which proclaims itself to be a blog which focuses on how the entertainment and media industries are impacted and influenced by the law, in Nova Scotia, you can't play like Adam Sandler.

Apparently, the Honourable Justice Arthur J. LeBlanc of the Supreme Court of Nova Scotia, ruled that the "Happy Gilmore shot" breaches a duty of care on the golf course. In case you missed it a HGS comes from the 1996 film "Happy Gilmore", where Adam Sandler showcases an unorthodox golf swing to win the Tour Championship and save his grandmother's home from IRS debt. 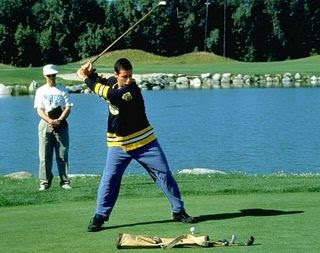 In the case, the plaintiff sued after the defendant tried to impress his golfing buddies during a bachelor party outing that included beer, tequila, and marijuana. On the 16th hole, under the influence, Travis Hayter whipped out his "Happy Gilmore shot," which the court defined in 2008 as "running from five to ten feet behind the ball and hitting it on the run."

The ball leapt up and struck the plaintiff in the wrist, then in the chest, causing permanent damage to the radial nerve. The plaintiff no longer was able to return to his former work as a woodsman on account of the incident.

THR, Esq. has a veritable cornucopia of titillation for the curious: