The coxswain of the boat is to be excused... 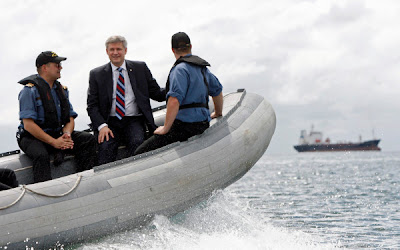 It is the responsibility of the Officer Of the Watch to ensure that the persons boarding a ship's boat are properly dressed... including life jackets.

It is a requirement in the Canadian Navy that all personnel in an open boat wear, at a minimum, inflatable life jackets.

Unless it's Stephen Harper.

The Coxswain of a ship's boat has the right to refuse to proceed until all personnel aboard are observing regulations... even civvies.

The Coxswain of the boat pictured above can be excused for believing Harper had a positive buoyancy life jacket on under his shirt.

That, and any exercise of the authority vested in the boat's Coxswain would have resulted in Harper's PMO hit-squad exacting career-smashing retribution, smearing the Coxswain's family and cutting funding for naval shipbuilding projects.