Gunfight at the Rideau Corral (in the kiddies section). Updated! 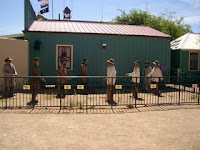 This, as Scott suggests, is going to get very interesting.

Well, it's the last opposition day before the House breaks for the holidays, and it turns out that all they -- or at least, the Liberals -- want for Christmas is ... the full set of documents requested by the Afghanistan committee, "in their original and uncensored form." That's the gist of the following motion, which will be the object of what is likely to be a lively debate in the Commons today. Spoiler alert: it's the last line that's the kicker:

It's worth reading the whole motion available at the first link above but, since Kady told us where to look for the load of buckshot, let's look!

accordingly the House hereby orders that these documents be produced in their original and uncensored form forthwith.

Zounds! And as Kady points out...

See that bit about 'the House hereby orders'? Matters of parliamentary privilege -- in this case, the "absolute power" to demand the production of documents -- are dealt with entirely within the aegis of Parliament itself; there is no court of appeal or outside authority that makes the final decision on the legitimacy of an order of the House. If the above motion passes -- and there is absolutely no reason to think that it won't, most likely later tonight -- it becomes an order of the House -- which, unlike, for instance, that feel-good Bloc Quebecois motion on what Canada's stance at the Copenhagen conference should be, cannot be simply ignored by a -- or, in this case, the -- government.

That is, for lack of a better description, the nuclear option. And the Liberals feel justified and safe in using it because of two things:

1. The testimony of CDS General Walter Natynczyk before the Commons defence committee has been reversed in a public statement by Natynczyk himself; and,

2. Defence minister, Peter "Airshow" Mackay, apparently has no one covering his "six".

Via James Morton, we get this very interesting observation from Jane Taber.

Stephen Harper defended his top soldier and the Canadian Forces today but never backed Peter MacKay amid opposition demands that he fire the Defence Minister over his handling of the Afghan detainee controversy.

For each and every call for Mr. MacKay’s firing, the Prime Minister would only say that the military acted correctly and with integrity.

Kind of makes that "deal", way back when the Harper Reformers hijacked the Progressive Conservative party back in December 2003, look pretty weak.

Oh yeah. The deal that Peter MacKay, having delivered the membership of his Progressive Conservatives into the hands of the Harper Reformers, would, should the new party ever form government, always hold a high profile cabinet position. This would ensure that, should Harper die of natural causes or be hit by a bus, that MacKay is well positioned for a successful leadership bid.

The Harperite reformers can deny the existence of such a deal all they like. It's obvious, given that MacKay has, on more than one occasion, committed acts, which the the reformers would view as sins, such that he should have been shuffled, at the very best, to the remotest end of the cabinet table.

The Harperites would love to ditch the irritating centrist remnants of the Progressive Conservative Party and get on with being intolerant right-wing maniacs. This current pot, boiling over on MacKay's stovetop as it is, presents an opportunity for them.

This parliamentary gunfight, held out in the open, will probably also end up with a blood-letting in the Harper caucus. If it doesn't, it means that MacKay has some very secure dirt on the Reformers.

Update: At 5:55 pm Fort Fumble time, the motion ordering the government to produce documents requested by the Afghanistan committee in their original and uncensored form, passed.

Someone should tell MacKay that, even if he finds a gun, he no longer needs a full load. A single bullet will serve the only purpose left.
Posted by Dave at 08:37 Recommend this Post