The Tea Party in mufti 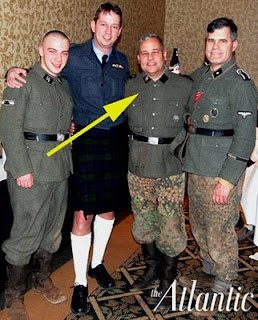 Honest. It's what George W. Bush apologists are wearing these days.

A Republican congressional candidate from Ohio, countering criticism from a House GOP leader, said he did nothing wrong by wearing a Nazi uniform while participating in World War II re-enactments.

Yeah, it's one politically astute move. I would ask, "What are these people thinking?" But then I would realize that for morons such as Rich Iott, that's a question too far.
You must now go off and read Driftglass.
Posted by Dave at 23:06 Recommend this Post