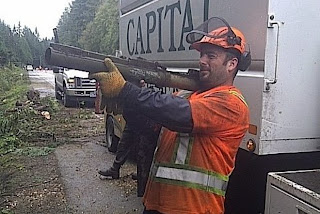 This is the last thing you should do. Without more than a cursory glance any trained individual can see the safety is out and the weapon is cocked. And, it turns out, there was a live round in the tube.

People are still scratching their heads as to where this thing came from, after being discovered on the Malahat, just south of Shawnigan Lake on Vancouver Island.

Hint: These things don't have serial numbers, but they do have batch numbers. And the sights are ancient compared to later versions.

Perhaps future posts will include pictures of an infantryman swinging a chainsaw or an engine room artificer running a wood chipper he found in the bush.
Posted by Dave at 23:47 Recommend this Post

In the photo, he's about half a second away from finger that bit of black rubber on top. I love the shot from the rear of the tube too. They found mortar bombs the other day too.

Soldiers forget stuff on a training exercise? I remember when I was there back in the 80s, the armed forces new recruits were reknowned for leaving live ammo in the woods around Victoria.

If its an old version of the device, maybe its been laying around for years.

I was thinking this was a staged photo after the weapon had been rendered safe, however, it appears the picture was taken with a cell phone camera.

It looks pretty beat up and the area it was found doesn't match with regular exercise areas. It may have been a dump off after a raid on a Nanaimo weapons cache a couple of years ago.

A biker gang heaved it out of their truck when they were about to be pulled over for speeding.

If it were found in the cocked state, perhaps someone did try to fire it and abandoned it when it didn't go off. It's a really old version and may have misfired.

I'm with Dana. I suspect there was a panicked phone call as a Nanaimo "house" was being raided by the RCMP and this thing got tossed out of the vehicle.