With today's release of 400,000+ Department of Defense documents on the Iraq war by WikiLeaks, once again the MSM is playing the Pentagon's mouthpiece quite well.

Reuters: (Lead paragraph.) The Pentagon said on Friday it does not expect big surprises from an imminent release of up to 500,000 Iraq war files by WikiLeaks, but warned that U.S. troops and Iraqis could be endangered by the file dump.

CBC: (Hillary Clinton) "We should condemn in the most clear terms the disclosure of any classified information by individuals and organizations which puts the lives of United States and partner service members and civilians at risk," she said in Washington, D.C.

CNN: "This is all classified secret information never designed to be exposed to the public," Morrell told CNN. "Our greatest fear is that it puts our troops in even greater danger than they inherently are on these battlefields. "

Didn't we hear the same dire warnings back when Wikileaks released the 70,000+ documents on the Afghan war?

How'd that come out, you may ask?

Well, to CNN and FoxNoise's (fer krise sake!) credit, buried down in their stories we read this:

CNN: Friday, Lapan said they know of no case where anyone in Afghanistan had been harmed because their name was in the leaked documents, but he made clear that doesn't mean such people couldn't be killed in the future.

FoxNoise: Lapan said that so far no Afghans have been killed as a direct result of WikiLeaks releasing the same type of information over the summer, but he characterized the leak as deplorable. 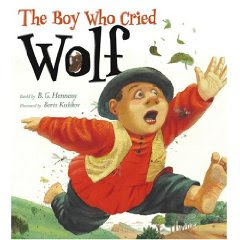 The Pentagon and State Department crowd might start stocking up on wolf spray and protective gear. Perhaps one day their dire warnings will go unheeded and ignored.

We'll probably have to clue the MSM in, though. It appears they're still drinking the Kool-aid and asking for refills . . . .
Posted by West End Bob at 20:07 Recommend this Post

Yes! You nailed it. The truth be known, if the powers that be were being honest about their "security" of persons, it would not be written in a report.

Jes a li'l thang I larnd somewhere out there in the real world.

I think it damn well should endanger the troops (and moreso officers). A whole whack of them should be in imminent danger of going to prison for a very long time. Not gonna happen though, the danger will pass.

The whole "beware honest reporting or you'll put the troops/collaborators in danger" ploy is so painfully obvious to anyone but the sheeple in the electorate. Unfortunately, the sheeple are those the Pentagon and MSM can count on buying into their bullshit . . . .