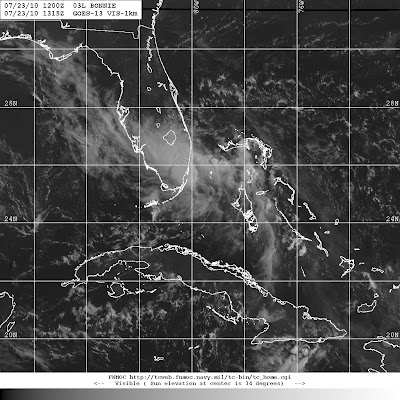 23/1500Z - Tropical Storm Bonnie continues to move in a West-Northwest direction at about 16 knots. Its landfall in southern Florida was relatively normal for a cyclone of this size although somewhat drier than might be expected. (I will clarify that by pointing out that it is still dangerous.)

Bonnie is a small cyclone and somewhat disorganized. It is being affected by an upper level low which is creating enough wind shear to inhibit intensification. Various models have Bonnie either maintaining its strength or weakening prior to a northern Gulf coast landfall. I would agree with that, however, many of those intensity models had a wobbly initialization. Bonnie's quick formation and small size make it difficult for most models to build a higher-skill intensity forecast.

Most track models agree that Bonnie will collide with the Gulf oil spill although the cyclone has increased track speed to a rate beyond yesterday's forecast. That should put Bonnie onto the oil spill by Saturday.

The NHC is not calling for intensification beyond a Tropical Storm with maximum sustained winds of 45 knots (83 kmh/52 mph). Storm surges are expected in the 1 to 2 foot range.

The possibility of Bonnie becoming a hurricane is currently very low and it would take a sudden drop in upper wind flow to give it conditions which would allow intensification. That isn't going to help the crews in the Gulf at all. Sea states and wind will force them to cease operations (which they have already reported to have done), until the effects of the cyclone pass.
Posted by Dave at 08:48 Recommend this Post