Going to the Vatican? Wear a sleeping bag 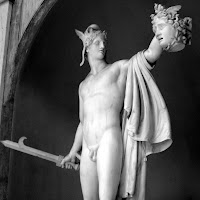 Apparently the officials at the Vatican have nothing more to worry about than seeing peoples' knees and bare shoulders.

Tourists and Romans clad in scanty summer clothing were being told to cover up before entering the Vatican City on Tuesday. Long-standing rules on modest dress, previously applicable only to those visiting St Peter's Basilica, appear to have been extended throughout the tiny walled state. Swiss Guard officers manning the official customs point between Rome and the Vatican City began pulling aside members of the public dressed in 'inappropriate' clothing early in the morning. Men in shorts and women with exposed knees or uncovered shoulders were all stopped by the officers, who asked them if they knew "how things worked here". Bewildered locals, accustomed to treating the Vatican much like any other part of Rome, initially assumed a new bureaucratic procedure was in force. Prescriptions, letters and shopping permits were hastily produced as evidence of plans to use the Vatican's pharmacy, post office and shop. Only to be told the real reason was their clothing. "This is the Vatican City and for reasons of respect, you are not allowed in with uncovered shoulders or wearing shorts," was the standard explanation. Some retreated without protest, while a number of the women made impromptu purchases from one of the many stands selling shawls and scarves near the Vatican gates. A cheap, quick solution to cover the bare legs of men in shorts was harder to come by, although some duly trudged off to the nearby shopping district of Cola di Rienzo to buy a pair of trousers. However, a number of visitors, especially the more elderly, refused to budge.

And from the Telegraph ...

The crackdown on inappropriate clothing comes at a time of almost unprecedented crisis for the Vatican, with senior figures, including Pope Benedict XVI, accused of failing to act against priests who sexually abused children.

Priorities. The Vatican has some.

(The unclad statue of Perseus in the image above is from the Vatican Museum)
Posted by Dave at 14:02 Recommend this Post

Email ThisBlogThis!Share to TwitterShare to FacebookShare to Pinterest
Labels: morality, teh pope, teh stupid, vatican