Preying on the fearful and naive 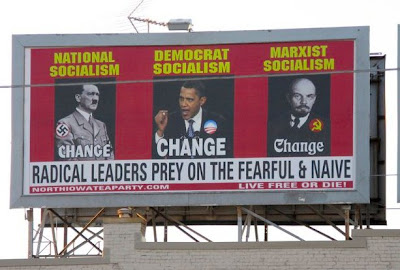 A local Tea Party billboard in Mason City, Iowa comparing Obama to Hitler and Lenin boasts the amusing slogan : "Radical leaders prey on the fearful & naive."
Not everyone likes it however.
Shelby Blakely of the national Tea Party Patriots says :

"It's not going to help our cause. It's going to make people think that the tea party is full of a bunch of right-wing fringe people."

and that would be just so unfair.
Ha, ha, stupid Americans. Oh, wait ...
Posted by Alison at 00:41 Recommend this Post