A gross misuse of the uniform

Click through to the DND website today and the first visual you get is the Minister of National Defence, Peter MacKay, smiling back at you - wearing a Canadian Forces CADPAT TW uniform. It's been that way all weekend after MacKay participated with a Canadian military team in the Nijmegen Four Days Marches. Except that he didn't participate in the entire march; he only showed up for the last day. How that fits with the regulations established by Stichting DE 4DAAGSE is beyond me.

Last week Boris pointed out, not only the danger involved in this visual, but the shameless, self-serving political theatre that it actually represents. What I pointed out, in comments to that post, is that MacKay's adoption of a Canadian Forces uniform for wear in public may well be illegal.

The Minister of National Defence is a civilian appointed to cabinet by the Crown on the recommendation of the prime minister. Reporting to that civilian are two different heads of two complimentary but different organizations: The Deputy Minister, a senior civil servant who heads the Department, and the Chief of Defence Staff, a uniformed flag/general officer who leads the Canadian Armed Forces. Both those senior people are responsible to the Minister of National Defence.

The National Defence Act makes it clear that, by statute, the Canadian Armed Forces are separate and distinct from the Department of National Defence. The minister's responsibilities are clear and the distinction is very clear. The Minister of National Defence is a political appointment of the government and, while responsible for the direction of defence policy, is not a member of the Canadian Armed Forces and cannot issue orders to the Regular, Reserve, Special force or other constituted elements of the CAF without doing so through the uniformed CDS.

The Minister of National Defence has no status-of-rank inside the Canadian Armed Forces. Period. Neither does the Prime Minister.

Most ministers of national defence would not dream of donning a CF uniform for any reason. One of the overarching foundations of a confederated and democratic Canada is that the Canadian military is a civilian controlled operation. When General Andrew McNaughton was appointed Minister of National Defence in 1944, during the 2nd World War, he assumed his duties as a civilian and appeared in civilian clothing. 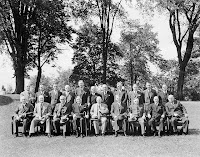 MacKay appears to place little value in the conventions and statutes which separate him and his office from the uniformed armed forces.

There are statutes restricting the wear of Canadian Forces uniforms to those who are entitled to do so.

Now, I will presume that MacKay either insisted or was somehow given official leave to wear a CADPAT TW uniform and that somehow, somewhere, someone decided it was either too trivial a matter over which to engage in a regulatory career-damaging fight or, someone didn't bother looking at the regulations.

CF Dress Regulations Ch 2, Section 1 paras 43, 50 detail when a civilian may wear a CF uniform. It also states that in such instances the the wearer must display a brassard on the left arm indicating the wearer's affiliation accompanied by the block letters CIVILIAN NON-COMBATANT. MacKay is a civilian yet did not do that.

Queen's Regulations and Orders article 17.06 also applies. From that and the following regulation you might notice that even a member of the CF has restrictions in the wear of the uniform.

The Canadian Protocol site offers no occasion when the Minister of National Defence is authorized to wear a Canadian Forces uniform.

So, what is MacKay's purpose?

There are some who suggest (and within limits I would agree), that having senior people join the ratings and ranks in challenges such as the International Four Days Marches is a good thing. That, however, has to be tempered with appropriate levels of decorum. And MacKay is not one of the "senior people" of the Canadian Armed Forces. He isn't a member.

The obvious is right there in the picture. This was a PMO approved photo op for MacKay. This was another display of the martial fetish in which members of Harper's government will find every opportunity to use the troops as a backdrop to demonstrate their personal machismo.

"Look at me! I am the warrior minister and I lead all Canadian troops."

Except that it is all theatre. "I'm not a doctor, but I play one on TV."

MacKay is not a soldier, but he'll play at it by dressing up.

In the end a dangerous association starts to bubble up. MacKay, by misusing the uniform of the Canadian Armed Forces for his own political gain, has once again attempted to portray the Canadian Forces as an arm of his political party.

As one commenter here said:

It is at times like this that an elderly person with a funny green suit in the closet might well reflect that he is not an employee of the federal government, but a personal servant of Her Majesty. And is only doing what Mackay and Harper say because Ma'am would like him to.

MacKay has grossly misused the uniform of the Canadian Armed Forces. That's illegal.
Posted by Dave at 08:04 Recommend this Post

The reason that I think that he used a uniform was for the simple reason that those marches get quite dirty and rough, and he would not want to get clothes or such dirty. also, there's no one saying that this was REAL CADPAT. There are identical uniforms, which have everything the same, the only difference being that hey do not have the infrared thread to disguise the wearer from Areal combatants. The other difference is that they are made by a civillian company not contracted to the DND. People that participate in this march are not all regular force or even current members of militaries. The majority are veterans, who, although technically not entitled to wear cadpat or their old uniforms still do. This is just for nostalgic and patriotic reasons. there are also cadets that march in these marches, and they are not CF members either. Just because he's wearing the uniform, doesn't mean it's real, or that he was trying to pretend that he was a member. He was just having fun, and showing pride in the forces, IMHO.

Your regs link in 1st graf isn't working. But I seriously get the point. The man is an utter fake--remember they mocked-up a cockpit for him to smile from?

Why not ask the Canadian Legion what they think? They're pretty conservative, but I don't think they'd think much of this playacting.

I was marching Nijmegen when Minister MacKay joined us on the second last day. He walked more in that one day than most did in 4 days. He would walk all the way to the front of the thousands of people making sure to spend time with each team. He had no training, yet joined the troops for what had to be over 60-70km's in one day. He wore the uniform properly (other than the t-shirt) and showed great respect for all military participants. He also led our team of course and over a ridge to the British rest stop which was conveniently out of the way. All and all, as a Sgt in the RCAF, i admire his dedication and willingness to come out and put in some physical labour with the troops. I didn't see any other politicians or government officials marching with us.