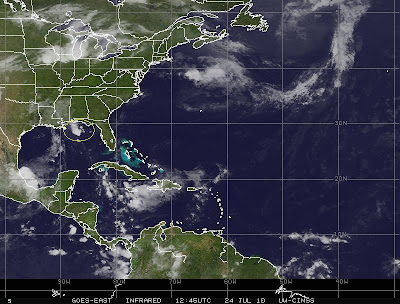 Bonnie is now downgraded to a Tropical Depression with surface wind speeds estimated at a sustained less than 30 knots (56 kmh/35 mph). 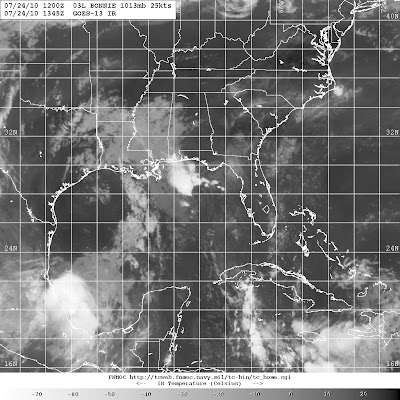 The cyclone is encountering 25+ knots of wind shear and is drawing in dry air from the southwest. It is being steered a little more south of the forecast track at about 15 knots tracking west-northwest. That should give it landfall at around 25/0400 UTC on the coast of Louisiana. There will likely be small areas of high winds in isolated squalls. In the area of the Gulf oil blowout this system, with timing and a bit of luck, should have less impact than the effects of Hurricane Alex.

The NHC has removed all Tropical Storm Warnings and added an interesting comment:

WE HAVE TO GIVE CREDIT TO DYNAMICAL AND GLOBAL MODELS THAT ALL ALONG FORECAST THE CURRENT WEAKENING TREND OF BONNIE.

I have to admit to joining a certain chorus of forecasters who viewed those intensity models with much skepticism.
Posted by Dave at 07:59 Recommend this Post