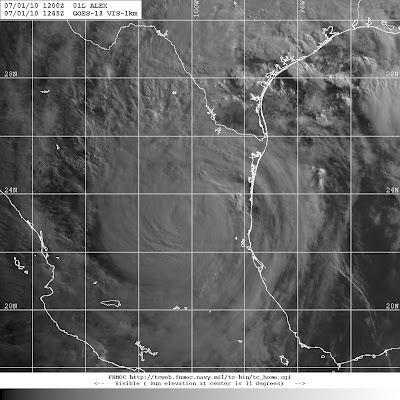 Alex made landfall across the North East coast of Mexico at Soto La Marina at about 0200 GMT. It has now been downgraded to a Tropical Storm. At the time of landfall the wind speeds had risen to over 90 knots (169 kmh/105 mph) making Alex a category 2 strength hurricane.

Alex will likely dissipate over the next day or so as it encounters the Sierra Madres. That will result in heavy rainfall and possible flooding/mudslides.

A couple of points of interest:

1. There has not been a category 2 hurricane in the Atlantic basin in June since 1966 (Alma).

2. Alex was/is huge. The radius of maximum winds was wide and hurricane force winds extended well over a degree of latitude (60 miles) from storm centre. The webcams at South Padre Island provided some interesting viewing until salt spray and rain obscured them. Some of the weather stations we were monitoring ceased transmitting as the worst winds passed through.
Posted by Dave at 07:00 Recommend this Post