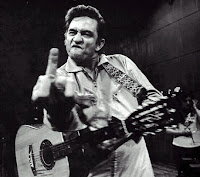 I think I still have a Zippo lighter with that motto engraved on it somewhere.

If I had my way, I would put all fights behind me and never have to fight again. I've had my fill of fighting, both in the organized military sense and the less organized, but perhaps more critical, defence against political/legal/corporate assaults on human rights and freedom.

The latter fight, I remind myself, (and others), is not something that can be set aside. The rights and freedoms I enjoy today came as a result of many before me who were willing to continue the fight, sometimes against overwhelming odds. Defending those rights and freedoms is not optional. Without fighting to defend them someone, attempting to advance some warped agenda, will try to remove them.

Without fighting, the inequality which still exists today would not be redressed. Because those who would prevent the advancement of human rights, freedom and equality, usually founded in some corrupted religious belief, will use any tactic they deem fit to achieve their goal of dominion over others. Such tactics include lying, obfuscating, physically harassing and killing their opponents. And that list is hardly exhaustive.

And now, there is a feeble plea that this side of the fight, my side, engage the other side with some "civility". We should not "offend" those who are forwarding an agenda of oppression.

Well, let me put it to the dominionists, the regressionists, the religious proselytizers and, particularly, the anti-woman crowd (since that tends to be all of those afore mentioned groups) in the most succinct way possible:

Fuck you and the horse you rode in on.

You want civility? NO. It's not even up for negotiation. You don't like the term "Fetus Fetishist", or any of the other terms used here and elsewere? Tough. Fucking. Bananas.

Do you find the terms offensive? Good. I'm not inclined in the slightest to be civil to the freaks who would subjugate women or any other group of people they would choose to make targets for discrimination. I'm not going to change their minds, but I'm not going to cast them in some light which suggests they are "civil". And the suggestion by some, anyone, that we all find middle ground so as to "discuss" issues is little more than an attempt to have the side which is not bent on human subjugation give ground to those who are - as some gesture of reduced enmity.

That would be disingenuous.

I don't like the people who would impose their superstition-driven false morality on others. I find them repulsive. I am not going to make nice with them.

To suggest that I, or more appropriately we, achieve nothing through the use of inflammatory language and the occasional use of vulgarity is to ignore the gross obscenity of those we target. If the worst I do is provide a literary kick in the nuts to some warped zealots out to impose their will on others, I haven't come close to the abominable behaviour they are willing allow themselves in the name of their self-described righteousness.

If you supposedly find yourself in the middle I would suggest you take a closer look. The anti-choicers, anti-abortionists, fetus fetishists, whatever you want to call them, employ tactics and language far more odious than anything you will ever read here.

When I see you taking them on, and I mean really taking them on, I might be inclined to listen to the "civility" plea. But don't count on it. To put it bluntly, I don't intend to surrender one fucking inch of ground - ever.

The fetus fetishists don't simply oppose legal, safe abortions. They oppose anything to do with giving women dominion over their own bodies. The arguments they put forth are camouflage. The same foundation groups opposing a woman's right to choose to remain pregnant or not are also opposed to a woman's right to prevent pregnancy through contraception.

And it's not just them. Anyone who believes they have the right to limit human freedom based on cultural, religious, racial or sexual differences is the same kind of repugnant asshole.

I have no intention of trying to find middle-ground with them. There is no reason to compromise or negotiate. There is, however, a good reason to keep fighting. And if they don't like that people actually fight back, tough. Let them howl.

And the next time someone suggests that we "kiss and make-up" with a bunch of flaming anti-choice lunatics, I would offer that you should get them to do it first. When they're done, tell them to wipe the shit off their lips.

Update: Mattt tosses the scabbard and bares the blade.

Email ThisBlogThis!Share to TwitterShare to FacebookShare to Pinterest
Labels: civility, who the fuck are they trying to kid