OK, this is just very, very creepy. From Elizabeth May:

What may have been the most fascinating part of the afternoon was my time in the Government Lobby. Behind the curtains that run along the last row of benches on both sides of the House, are doors to long skinny living room areas. One is called the Opposition Lobby; the other the Government Lobby. In my pre-Green Party leader life, I have spent a lot of time in both. The Government Lobby was a frequent work space when I was Senior Policy Advisor to the federal Minister of Environment back in the mid-1980s. And I frequented both lobbies when I was with Sierra Club of Canada from 1987-2006. It did not strike me until I walked into the Government Lobby to await my turn as Speaker that I had not been in there since Stephen Harper became Prime Minister.

The student with me said it was the same in Langevin Block, the Prime ministers Office. Photos of Stephen Harper everywhere.

And if you think Ms. May is exaggerating, I give you Kady O'Malley:

I didn't mention the Wall of Harper in my original post, but not because I didn't think it was worth noting. The government and opposition lobbies have been off limits for the press gallery for years, and I didn't want to get anyone at QMP in trouble for bringing a journalist into the House, even during the parliamentary off-season. But now that someone else has spilled the beans on the Conservative decorating scheme, I'm lifting my self-imposed non-disclosure agreement long enough to confirm her report. And yes, it is a little disconcerting, although I did like the picture of the Prime Minister gazing thoughtfully at a polar bear. Make of that what you will.

Remember when we used to call it The Stephen Harper Party and mean it as a joke?

Be afraid. Be very afraid. This kind of behaviour doesn't belong in a parliamentary democracy... anywhere.

Oh yeah. I'm guessing the picture of Harper in the Festus get-up isn't included in the self-admiration display.

Zorpheous and Holly Stick in comments provide this reminder. And I am pleased to prove to you that Harper admiring an array of photos of himself is something of a habit. 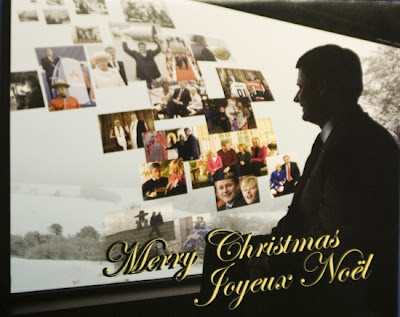