Here's a couple of pictures of some of the snow in the back yard here on the slope of Mount Seymour in North Vancouver.

The snow Bichon Frises here are along the fence. You can see that they're drinking out of clay flower pots.

The view below is off the kitchen steps to the back fence, which as you can see, grows sunflowers even in the snow. 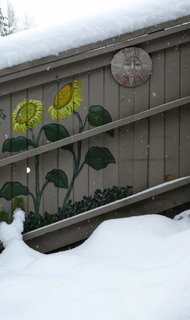 There's a lot of it. Reportedly a record amount for the date in fact. With more to come and no rainy temps in sight till toward the end of the first week of December.

UBC is closed due to a campus wide power outage. SFU has power but is closed too being on top of a mountain and all. The vast majority of schools and colleges are closed with the one exception being the North Van campus of Capilano College where toils my beloved. They were closed down completely for three and a half days week before last due to a huge GVRD water main break. That's a lot of lost class time so they weren't going to close again come hell or high frozen water.

I've had a couple of brief power outages here. One barely a few seconds and one more like a couple of minutes. There are a lot of trees coming down under the heavy snow all over the lower mainland and taking power lines down with them. One report I've seen says about 60,000 people are without electricity GVRD wide. I'm glad I upgraded my surge protection after the rainfall induced power outages two weeks ago.