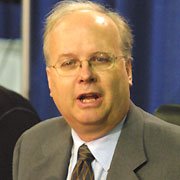 Yup! That's the Bushco kiss of death. Speculation is that we can expect to hear it soon and political scumball, Karl Rove may be toast.

Pam picked up on the fact that Rove may know where all the bodies are buried, thus is invincible and extremely difficult to toss out the door.

But that doesn't mean he won't be tossed under a bus!

I personally share Shake's Sis point of view on the whole thing:

Please, Jeebus, let him get shit-canned and be pissed to high heaven about it, and go on a tell-all rampage spilling the beans like there’s no tomorrow. Nothing would make me happier than to see an exiled Rove flinging shit at Bush like a deranged monkey with an axe to grind.

That all depends. A Presidential Medal of Freedom goes a long way to shutting-up those who have fucked-up and might blab. And, it's cheap too!

I guess it depends on whether Rove can be amused by a shiney object. It would be kind of like giving an earring to a cobra.
Posted by Dave at 17:34 Recommend this Post