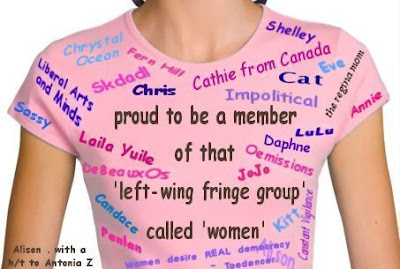 "I'm thinking of making T-shirts: "Proud to be a member of that 'left-wing fringe group' called 'Women,' " wrote Antonia Zerbisias two days ago. She was referring of course to Steve's unplugged nonsense from Wednesday :

"Thank you for finally admitting that your government shut down the Court Challenges program in 2006 not just because, as then-Heritage Minister Bev Oda claimed in Parliament, you "recognize the importance of women" but because you believe that that women's rights are "left-wing fringe" rights."

As well as gays, lesbians, persons with a disability ...
The Court Challenges Program (CCP) funded "test-cases initiated by individuals and groups to challenge federal laws and policies that violate their constitutional equality rights."

Yeah, good thing we got rid of that - now only the rich can afford to worry about equality.

Antonia Z has a facebook page for Proud to be's , a follow-up blogpost today, and a T-shirt design from Francesca Dobbyn. Really hoping to see those T's on the streets in time for our maybe upcoming election.

In the meantime, here's our virtual T above, signed by the proud to be left-wing fringe women bloggers and commenters group at Creekside over the last couple of days, plus, um, one guy I just couldn't resist. Sadly the Beav expense account does not extend to actually printing them up but hey - Woot! - that was fun! Print one up yourself - I'm going to.

With many thanks to all for your names, your support, and to Antonia Z, DAMMIT JANET, Cathie from Canada, Impolitical, Warren Kinsella, Constant Vigilance, Bread n Roses, and all you facebookies for linking to it.
.
Posted by Alison at 23:13 Recommend this Post

PtboVotesGreen said...
This comment has been removed by the author.
14:17