The HST will create thousands of elephants in BC 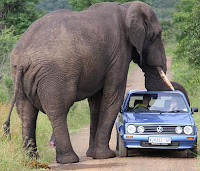 That's right. Elephants. Or, if you've been listening to Gordon Campbell's homeboy, Colin Hansen, it will be jobs.

You see, Hansen is ready at a moment's notice to don his body armour and jump out in front of a microphone to tell you that introducing a 12 percent HST in British Columbia will create thousands of .... (oh hell, just fill in the blank with anything you like)... jobs.

That, however, is his end game. What he never tells you is how he expects all that fresh new employment to be created or even if, after his closed door meetings with the movers and shakers in the anti-PST business world, if he has even the slightest hint of a guarantee that such a thing will happen.

Reason? He doesn't have a clue. He's hoping that the economic crash, (brought about by the very people who are telling him that HST is a job creation formula), will ease and that a slow recovery in the US house construction market will see forestry and mill jobs start to increase in BC. He'll then point to the nexus of unemployment in BC and tell you how his wizardry created jobs. (Never mind that they were the very same jobs which were lost because conservatives of his ilk refused to acknowledge that the financial world had gone south with everyone's life savings.)

So, I take pleasure in pointing out a few things which lead out of Bob's posting.

After protest sprung up around the province Hansen once again took his position in front of the microphone. (Emphasis mine)

Finance Minister Colin Hansen was quick to respond, holding a news conference with business leaders to talk about why B.C. should implement the HST.

"There's no question that the HST is the most effective form of … consumer tax that a country or a jurisdiction can implement," he said, adding the tax will create jobs.

Bully!! Aside from the standard "it will create jobs" bullshit, it raises another small question: The Campbell corporate government has been in power since 2001. How is it that every overture from the feds to implement HST was dismissed by this mob until now? If it's the most effective form of consumer taxation, as Hansen describes it, why did it take eight full years to buy into the idea? Were they just too stupid to realize how cool a system it was?

So, they're either very dumb or they're lying. Either way, they shouldn't be allowed to represent anybody.

The kicker however is the continuing line that Hansen and Campbell had not formulated a plan to implement the HST before the last provincial election (May 2009). By their account, the idea was latched onto after they retook government. (Which would make it a hastily adopted plan without public consultation.)

So, along comes the Victoria Times-Colonist asking for information. They wanted to see the government correspondence related to the HST from January to September 2009. Surprise!

The Times Colonist, like dozens of other media outlets, is requesting the documents to see whether the Liberal government is telling the truth when it says it never considered implementing the HST before the May election. It introduced the tax less than two months after winning a new majority government.

Diligent little devils down there on Douglas Street and what did they get?

A Freedom of Information Request by the Times Colonist for government records about the HST came back with a hefty fee estimate this week: $3,500.

$3,500 for photocopying and vetting?! Yet Hansen says they weren't even considering it before the middle of this summer.

That's a lot of correspondence that piled up in a few weeks.

I wouldn't even bother asking any further. The estimate for the FOI request alone tells the story. There is a ton of documents. And the bill the Time-Colonist would have to pay is either an intentional intervention by a minister to make them go away or the pile is so huge that it stretches back to 2008.

It doesn't matter. It just means the Campbell government is moulded around the things it has always found attractive: corruption, liars and drunks.