Why are we in Afghanistan? 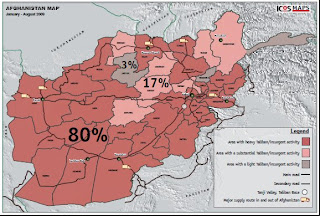 Map of Taliban presence in Afghanistan from
The International Council on Security and Development :

Data detailing the presence of the Taliban in Afghanistan was gathered from daily insurgent activity reports between January and September 2009. ICOS believes that the level of incidents recorded by this methodology is conservative.

If we are to have standing armies, the very least we can do, the absolute minimum responsibility we have to them, is not send them off to die in the useless occupations of nations who have done nothing to us.

Why are we occupying Afghanistan again?

Not, as Gordon O'Connor foolishly announced in the HoC in April 2006, to prevent "them from coming here".
Not, as recent elections there attest, to bring democracy to the people.
Not even apparently to improve their lot in life :

"Every three months, the Canadian authorities publish a scorecard on their military "progress" in Afghanistan. ... The latest report, revealed this week, proves that Kandahar province is becoming more violent, less stable and less secure – and attacks across the country more frequent – than at any time since the fall of the Taliban in 2001. There was an "exceptionally high" frequency of attacks this spring compared with 2008.

There was a 108 per cent increase in roadside bombs. Afghans are reporting that they are less satisfied with education and employment levels, primarily because of poor or non-existent security. Canada is now concentrating only on the security of Kandahar city, abandoning any real attempt to control the province.

Canada's army will be leaving Afghanistan in 2011, but so far only five of the 50 schools in its school-building project have been completed. Just 28 more are "under construction". But of Kandahar province's existing 364 schools, 180 have been forced to close."

And not, as Ann Jones - author of Kabul in Winter and a teacher in Afghanistan from 2002 to 2006 - writes in a remakable first-hand report at Tom Dispatch following her return trip this July, to train an Afghan police force and army to take over after we've gone either :

"So who are these security forces? They include the Afghan National Army (ANA) and the Afghan National Police (ANP). International forces and private contractors have been training Afghan recruits for both of them since 2001. In fact, the determination of Western military planners to create a national army and police force has been so great that some seem to have suppressed for years the reports of Canadian soldiers who witnessed members of the Afghan security forces engaging in a fairly common pastime, sodomizing young boys.

Current training and mentoring is provided by the U.S., Great Britain, France, Canada, Romania, Poland, Mongolia, New Zealand, and Australia, as well as by the private for-profit contractors MPRI, KBR (formerly a division of Halliburton), Pulau, Paravant, and RONCO. "

Eight years on and $10-billion later just for training the police force, Ann Jones tells us, with a projected goal of 400,000 as the supposed end-strength quota for the combined security forces -- an army of 240,000 soldiers and a police force with 160,000 men, where are they?

"What is there to show for all this remarkably expensive training? Although in Washington they may talk about the 90,000 soldiers in the Afghan National Army, no one has reported actually seeing such an army anywhere in Afghanistan.

When 4,000 U.S. Marines were sent into Helmand Province in July to take on the Taliban in what is considered one of its strongholds, accompanying them were only about 600 Afghan security forces, some of whom were police.

Why, you might ask, didn't the ANA, 90,000 strong after eight years of training and mentoring, handle Helmand on its own? No explanation has been offered. American and NATO officers often complain that Afghan army units are simply not ready to "operate independently," but no one ever speaks to the simple question: Where are they?

My educated guess is that such an army simply does not exist. It may well be true that Afghan men have gone through some version of "Basic Warrior Training" 90,000 times or more. When I was teaching in Afghanistan from 2002 to 2006, I knew men who repeatedly went through ANA training to get the promised Kalashnikov and the pay. Then they went home for a while and often returned some weeks later to enlist again under a different name."

And with 40% of country unemployed who can blame them ?

"Think instead about what you might have won -- and could still win -- had you spent all those military billions on food. Or maybe agriculture. Or health care. Or a civilian job corps. Is it too late for that now?"

Yes, Ann, it is. Because we are not even there because it is the "right thing to do".

"The Afghan war is a fraud. It began as an American vendetta for domestic consumption in the wake of the 11 September 2001 attacks, in which not a single Afghan was involved. The Taliban, who are Afghans, had no quarrel with the US and were dealing secretly with the Clinton administration over a strategic pipeline. They offered to apprehend Osama Bin Laden and hand him over to a clerical court but this was rejected.

The establishment of a permanent US/NATO presence in a resource-rich strategic region is the principal reason for the war...The game is over.

Corporatism and a reinvigorated militarism have finally appropriated parliamentary democracy, a historic shift.." 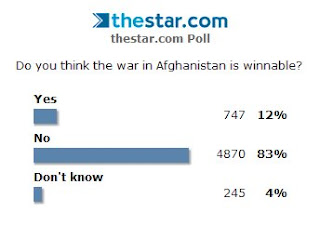 Poll results from yesterday's Toronto Star
- one vote per IP (yes, I checked)