They can't read the health care bill, they can't behave in public meetings - hell, they can't even count - but they sure are angry. And ignorant. And racist.
The 9/12 movement - typical conservatives: A day late and a clue short.


Please America, don't let these modern-day know-nothings bully the rest of you into going along with their pig-ignorant me-firstism. Let them know that elections have consequences and that they lost the election by a huge margin. Most of these geezers will be dead of old age and apoplexy in ten or twenty years anyways if meth addiction, gun accidents and other forms of fatal stupidity don't get them first.

These are the same people who bought into Nixon's "Silent Majority" bullshit and were taught to hate anyone smarter than themselves and obey anyone richer than they were. The same bloodthirsty reactionaries who cheered for the Chicago cops at the Democratic convention in 1968 and for the Ohio Nation Guard at Kent State a couple of years later. The same people who thought that William Calley deserved a medal instead of a court martial. The same people who thought Woodward and Bernstien should have been jailed for treason. The same idiots who still think Bill Clinton lying about getting a blowjob was more important than Iran-Contra. These are the same square-headed, gas-guzzler driving, aerosol-cheeze-eating, rainforest-chopping, gun-hording, smug, "I'm-all-right-Jack" asses who shout "get a job" at homeless people and "If you don't like it here, why don't you move to Russia" at anti-war and human-rights demonstrators.

Well, here's a news flash Mr. and Mrs. Silent Majority: The popular, legitimately nominated candidate of one of America's two main political parties won the election in a legitimate fashion by a sizable margin. He might not be the person you voted for, he may even be a different color than you and think differently from you, but he is still the President, just like the last guy was. It's funny you're getting all upset about government spending now that someone wants to spend the money on getting poor people decent medical care instead of blowing up foreigners for no good reason. You don't like it --too damn bad. "America, love it or leave it" If you chickenshit, hardhearted, crewcut facists don't like it in the land of the free and the home of the brave, why don't you move to Shutthefuckupistan?

Doesn't sound so good when the shoe is on the other foot does it? But you'll notice, despite the amped up feelings on both sides, virtually no one on the left side of the divide is calling the people on the right traitors or questioning their patriotism or issuing "conservative hunting licences" or saying they should all be put to death. A lot of us on the left would love to see George Bush and Dick Cheney and the rest of their junta in jail for war crimes, but I don't recall seeing any of them burned or hung in effigy. I didn't see any guns at the anti-war rallies. We may have called Bush a Nazi, but he was killing tens of thousands of people and wiping his ass with the constitution at the time - actions which the conservative movement mostly applauded I might add - while Obama's great crime is trying to save the U.S. economy from meltdown and fix it so everyone, rich or poor, can go to the doctor if they are sick.
That isn't socialism any more than having a tax-funded fire department or public school system or public roads are socialism. You want to know what socialism is? Having the government build sports stadiums at taxpayer expense. It starts down the road to facism when they do it so that private companies run by their cronies can use the stadium to make a profit. But I digress.

So the LaRouchers, the Glenn Beck fans, the Klansmen, the Paulites, the white pride militiamen, the conservative bloggers, the freepers, the CPAC creeps and the Ayn Rand fan club got together and had they little jambouree in Washington. Good for them. If Osama Bin Laden had crashed a 747 on their little shriekfest and killed them all, the average IQ in the United States would have gone up ten or fifteen points, but it still would have been a tragic waste of human life.

This something the screamers on the right don't get. No one really wishes you ill, no one wants to hurt you and you aren't going to sent to a re-education camp or have homosexuality "shoved down your throat" or be made to pay more taxes unless you are already pretty well off. We just wish you would stop shouting nonsense while grown ups are talking and stop getting in the way while we are trying to clean up your mess.

If you'd calm down and turn off Rush and Beck and Fox News for a couple of weeks and read a book or two about history and politics that were not published by Regnery or recommended by National Review, if you went out and listened to some people who weren't exactly like you, you might even realize that your country could be a pretty wonderful place for everyone in it if you'd pitch in and help out a bit and stop trying to screw people to get a little more crap you don't really need - started thinking more about how you're playing the game and whether you're really having any fun than what the score is and winning at any cost.

Everyone in the United States, no matter how ignorant or bugfuck nuts, has the right to voice their opinion and demonstrate and if nothing else, this outpouring of crazy should at least galvanize the Sensible Majority(tm) to turn off hate radio and change the channel when Glenn Beck comes on. But that isn't enough. Agreeing to disagree is fine between reasonable people on issues that are not life and death. But going along to get along is not working with the militant conservatives. If you give them an inch, they will take your yard, put a chemical waste dump in it and then refuse you health insurance when the chemicals cause cancer and won't let you sue the chemical producers because that would be liberal nazi socialism or something and capitalism rools USA! USA! USA! Blar-har-har-har! --- This cancer on the body politic must be confronted before it poisons public discourse for another few generations. These guys invariably lie or just plain don't know what the hell they are talking about -- they need to be called on their shit constantly.

Everyone is entitled to an opinion, but everyone is also entitled to tell you that your opinion is stupid, meanspirited and totally uniformed and should be ignored if not ridiculed. To put it in terms the teabaggers understand, I bring you one of the most iconic photos of our internet age, the guy I like to think of as Teabagger Zero: 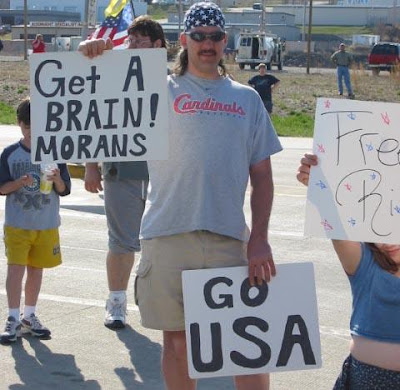 (hat tip to Red Tory, and JJ)
P.S. Austin Cline says a lot of this in a much more eloquent and organized fashion over at the General's
(crossposted from the Woodshed)
Posted by Unknown at 02:32 Recommend this Post