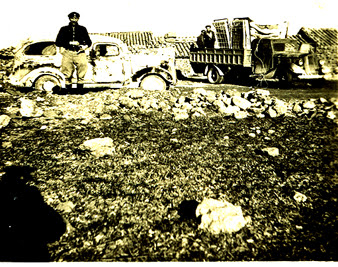 THE SPANISH CIVIL WAR was the run-up to WW2, which started 70 years ago today, September 1st, and Dan Kaufman has an article worthy of your time in THE NATION, entitled, "La Despedida: A Lost Memoir of the Spanish Civil War".

The article is an overview of the tragic ghastly conflict, and a book review of War Is Beautiful, a long-lost memoir by James Neugass, a volunteer ambulance driver during the conflict.

The book's publication is remarkable for many reasons, not least the survival of the manuscript. In 2000, more than fifty years after Neugass died of a heart attack in a Greenwich Village subway station and nearly as many years after most of his papers were destroyed in a cellar flood, a book dealer discovered a manuscript of Neugass's in a Vermont bookstore that was believed to have come from the collection of Max Eastman, onetime editor of the influential leftist magazine The Masses.

For Neugass, two facts of the war were inescapable: Hitler and Mussolini were providing overt military support for Franco, and the Non-Intervention Agreement signed by the Western democracies, crucially France and Britain, forbade any involvement in the Spanish Civil War, including the sale of arms to the Republic. Italy and Germany were also signatories to the treaty, but they openly defied it: Italy dispatched more than 75,000 professional soldiers to aid Franco, and Germany mobilized pilots and a fleet of ultramodern bombers. (Responding to Germany and Italy's involvement in the war, the Soviet Union sent military equipment and some 3,000 personnel to aid the Republic.) Neugass's mind drifts to those tactical facts repeatedly, even when his immediate problem is commonplace. "The lack of a tire pump can kill a man as easily as the lack of a helmet. I haven't got one of those either. All of them are up at the lines...or should be," he wrote. "The entire country is organized to strengthen the thin thousand mile dam of dugouts, men and munitions which separate not only the Republic but every democratic nation on earth, from fascism." His metaphor proved prescient; five months after the Republic fell, Hitler invaded Poland.

The desperation of the peasant was typical of many who toiled at the bottom of Spain's semifeudal agricultural system. Much of the Spanish countryside was divided into enormous agricultural estates called latifundios, and the estate owners generally considered their workers to be almost indistinguishable from their other property. Between 1918 and 1921 a series of peasant uprisings erupted in southern Spain. Though the army and the Guardia Civil eventually put down the laborers' revolt, sporadic strikes and reprisals continued throughout agrarian Spain. The landowners, anxious to subjugate the peasantry, enthusiastically supported Franco's military revolt against the Republic, which had been trying, with limited success, to introduce land reform and break up the latifundios. Gen. Emilio Mola, an architect of the rebellion, articulated the fascists' method to regain control over the peasants in a martial law proclamation on the second day of the war: "Re-establishing the principle of authority unavoidably demands that punishments be exemplary both in terms of the severity with which they will be imposed and the speed with which they will be carried out."

Neither the landowners nor the fascist troops needed much encouragement. As the British historian Paul Preston details in a profile of Capt. Gonzalo Aguilera, an estate owner and press officer for Franco, the day before Mola's proclamation Aguilera lined up his workers, randomly selected six and publicly shot them as a warning to the others. (Aguilera's actions are not surprising in light of what he told an AP correspondent about the Spanish masses. "They are slave stock," he said. "They are good for nothing but slaves and only when they are used as slaves are they happy.") Near Córdoba, at the beginning of the war, a landowner shot ten of his workers in retribution for every fighting bull the workers had slaughtered for food during a brief collectivization of his estate. Outside Seville, fascist officers made peasants dig their own graves before shooting them. Just before the peasants were murdered, the officers mocked them. "Didn't you ask for a plot of land?" the officers yelled. "Now you're going to have one, and for ever."