The Afghan Army — Is It a Figment of Washington's Imagination? 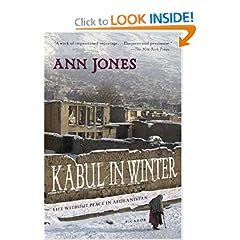 TOMDISPATCH.COM is a fine source of articles of concern to us all. Afghanistan has rightly come to their attention:

it's remarkable how little we actually know about the staggering expensive American and NATO effort to train the Afghan army and police. Stop and think for a moment. When was the last time you read in any U.S. paper a striking account, or any account for that matter, in which a reporter actually bothered to observe the training process in action? Think how useful that might have been for the present debate in Washington.

Fortunately, TomDispatch is ready to remedy this. Site regular Jones, who first went to Afghanistan in 2002 and, in an elegant memoir, Kabul in Winter, has vividly described her years working with Afghan women, spent time this July visiting U.S. training programs for both the Afghan army and police. She offers an eye-opening, on-the-spot look at certain realities which turn the "debate" in Washington inside out and upside down.

Meet the Afghan Army
Is It a Figment of Washington's Imagination?

In the current policy debate about the Afghan War in Washington, Senate Armed Services Committee Chairman Carl Levin wants the Afghans to defend their country. Senator John McCain, the top Republican on the committee, agrees but says they need even more help from even more Americans. The common ground -- the sacred territory President Obama gropes for -- is that, whatever else happens, the U.S. must speed up the training of "the Afghan security forces."

American military planners and policymakers already proceed as if, with sufficient training, Afghans can be transformed into scale-model, wind-up American Marines. That is not going to happen. Not now. Not ever. No matter how many of our leaders concur that it must happen -- and ever faster.