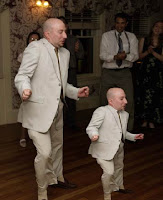 Ohmifuckinggod. I knew it was bad, but I actually never expected this. There is a whole Reader's Digest article than now has no meaning.

Bush picked up the AIDS theme, saying, “I know I speak for Steve” as he talked about the need to fight both AIDS and poverty.

I hope, Steve, that you at least insisted that he wear a condom.

OK, OK. Since I have to prove it to you. The Reader's Digest thing is here and well, this no longer has any meaning.

RD: Are there comparisons that offend you?

Harper: Yes. The Bush comparisons offend me. And not because I have any kind of personal dislike of George W. Bush. I don’t. It’s that the comparisons generally are not thoughtful. Bush has SUVs in his motorcade, and I have SUVs in my motorcade—“Ha ha, he’s just like George Bush.” Well, of course, this is actually the decision of the RCMP, and I’m sure George Bush
didn’t pick out the cars in his own motorcade either. That kind of thing bothers me because it’s just a stereotype designed for polemical purposes.