Powertools does heroes. (And leaves out a few details) 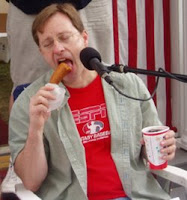 McCain rarely talks about his own Vietnam era heroism, and he would be the last person to criticize the British hostages for their less than inspiring performance over the last couple of weeks. But that story can only remind us of the extraordinary courage and integrity that McCain showed under the most trying conditions possible.

Well, Hindraker, I don't doubt McCain limits his discussions when it comes to his "heroism" in Vietnam. And he should be the last person to criticize the behaviour of the Royal Navy personnel taken captive by Iran. Unlike McCain's situation, where the US was a belligerent in a war with North Vietnam, Britain is not at war with Iran.

Demands for military information were accompanied by threats to terminate my medical treatment if I [McCain] did not cooperate. Eventually, I gave them my ship's name and squadron number, and confirmed that my target had been the power plant.

Reds Say PW Songbird Is Pilot Son of Admiral . . . Hanoi has aired a broadcast in which the pilot son of United States Commander in the Pacific, Adm. John McCain, purportedly admits to having bombed civilian targets in North Vietnam and praises medical treatment he has received since being taken prisoner.

But hey! At least they seem to have set aside the inter-service rivalry.
Posted by Dave at 23:05 Recommend this Post