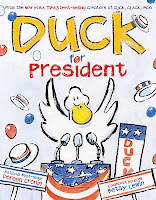 The annual White House Easter Egg Roll was held yesterday. US First Lady Laura Bush made happy with the first event of spring on the White House lawn. Readers need to be made aware now that Easter Monday is a secular event.

Well, sort of. Egg Rolling is traditional, but in some countries it is known as Dyngus Day or Wet Monday. Wet Monday involves boys sneaking into girls bedrooms and waking them by tossing multiple buckets of water on them. This is apparently a pre-Christian thing. But then, so are Easter eggs.

Thousands of kids dressed for winter weather scrambled for eggs - Easter eggs, that is - at a White House ceremony dating back to the 19th century

The annual White House Easter Egg Roll, started by President Rutherford B. Hayes in 1878, typically has been a rite of spring in Washington. But on Monday, it was afflicted by winter's parting bite - cold air and even colder grounds. Undaunted by any of this, the young guests sprang into action under the watchful eyes of their families, hostess Laura Bush and several Bush administration Cabinet secretaries.

"In Washington, we know spring has arrived when the White House lawn is filled with children for the Easter Egg Roll, one of the happiest traditions here at the White House," the first lady said.

The cold would explain why the White House went with Egg Rolling instead of tossing water on the females. (Take that anywhere you like, I was thinking more in terms of hypothermia.)

Anyway, after running around rolling eggs with spoons the little ones were treated to a special reading by Laura Bush of a book which one can only assume is on the shelf of the White House library. Remember, there were several cabinet secretaries in attendance.

After her welcome, the first lady sat in one of the area's designated reading nooks and read "Duck for President," by Doreen Cronin. It's a story of a duck who gets sick of farm chores and decides to run for office - first for head of the farm, then governor and, finally, president. In the end he decides running the country is too much work and goes back to the farm.

(Click on image for an even better description of Cronin's book)
Posted by Dave at 14:12 Recommend this Post