Via This Old Brit comes a report of an earthquake which hit Folkestone, Kent, England, this morning at 8:19 AM British Standard Time.

An earthquake has shaken parts of Kent, damaging buildings and disrupting electricity supplies.

Homes in five streets in Folkestone had to be evacuated because of structural damage including cracked walls and fallen chimneys.

The magnitude 4.3 tremor struck at 0819 BST and experts said its epicentre was a few miles off the coast in the English Channel.

I've been to Kent many times in my life and, well, it's really not all that earthquake-proof. But as Richard points out, there was another very serious consideration.

This is the BBC Graphic showing the epicentre of an earthquake 4.3 on the Richter Scale occurring 7.5 miles off the Dover coast in the English Channel.

Just for information, the headland sticking out into the Strait of Dover from France is Calais.

Now look at this graphic (courtesy of Richard): 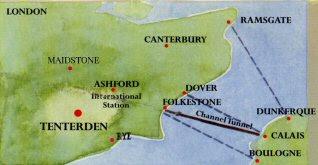 That's a direct hit by a 4.3 earthquake on the Channel Tunnel between Folkestone and Calais. Interestingly, there was absolutely no news as to the state of the Chunnel.

Methinks it's time to go looking for cracks. No?

(There is no word whether the Bush administration in the US is considering launching a War on Earthquakes.)
Posted by Dave at 11:30 Recommend this Post